SGA President Mason Barker said he and Vice President Dominic Procaccino made this discovery over the summer.

“When the Vice President, Dom, and I were elected, we were just sitting in the old SGA office in the downstairs student center,” Barker said.  After moving offices and sorting through some things, he says they found a poster noting SGA was established in 1918.

“It’s a monumental thing, it really is,” Barker said. “We just celebrated 100 years with the A&M system and so being around at that time was probably something really exciting.”

The organization has grown and changed throughout the last century, in numbers, names and organization.

“Over the years it’s changed its name several times from Student Council to, I think at one point, Student Body was the name of it,” said Barker. 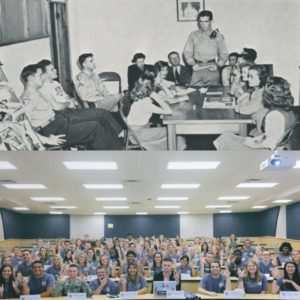 Barker said it wasn’t until a president in the late 1900s made the organization more like a legislature, mimicking a regular government.

SGA members will be celebrating their organization’s milestone March 19-24 in what they’re calling “SGA Week.”

“It overlaps with Service Week which is totally OK because we are here to serve not only our students but our community,” said Barker.

SGA has events planned for each day to celebrate.

Monday will be “Coffee with Congress.” There will be free SGA coffee cups and it will give students the chance to meet the people that represent them as well.

On Tuesday, details are still being laid out, but SGA is planning to try and break a world record. Barker is also hoping to have someone come out to help make breaking a world record official.

Although Wednesdays are usually when the weekly SGA meets, Barker says they will instead hold a Town Hall meeting.

“We’ll find some hard-hitting topics at Tarleton and some things that need to be discussed and get that feedback from our students and, hopefully, from that make legislation and make those changes,” Barker said.

Tarleton’s Head Baseball Coach Bryan Conger has a son, Jacoby, with Cardiofaciocutaneous syndrome, a rare genetic condition that typically affects the heart, facial features and skin. The family recently found out about their son’s condition after about eight years of not really knowing.

“The CFC organization heard about it and we are hopefully going to help raise some funds for that organization and give back to them,” Barker said.

After that, SGA will head into its final day of celebration.

Barker said the organization hopes to “do a giving night on Friday and then Saturday after Round Up, I think we’re looking at doing like a carnival,” he said.

Students will also get to see posts on social media from SGA about some of the legislation and service work they have done for Tarleton over the past 100 years.

“Just to say like, look at all these things we’ve accomplished in 100 years, imagine what we can do in the next 100,” he said. “The biggest goal of it all is just to make sure that students know what SGA is here for.”

Barker also mentioned some of the most notable SGA initiatives that have taken place, such as Purple Thursdays (1997) and naming the bonfire after L.V. Risinger (1994)

“We’re creating a lot of our bylaws so that the structure that we establish…over 100 years is bound to change, but that we did our best to make sure the future of SGA is successful,” Barker said.

As the 100-year celebration continues and passes, Barker said he’d like to see more student engagement and participation with SGA and in their meetings.

“Over the years, really the most important part of our role is advocating for students and being in those meetings and being able to say, ‘Well, here’s what the students would want’,” he said.