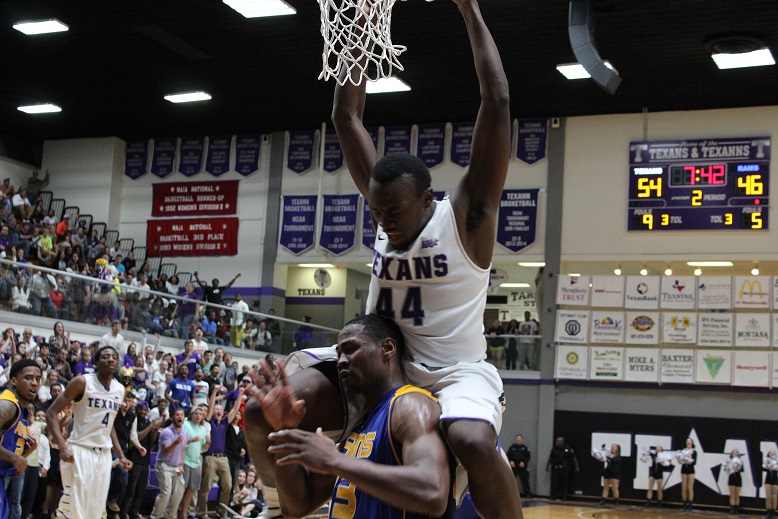 STEPHENVILLE – Tarleton State won its eighth straight game and third over a top-25 opponent in the last two weeks after they held on to a nail biter, 72-68, over Angelo State on Wednesday night in Wisdom Gym. The No. 11 (21-2, 8-2) Texans upset the No. 4 (21-2, 9-1) Rams in front of a capacity crowd, winning their twelfth straight over ASU in Wisdom. The win also snapped the Rams 16-game winning streak. 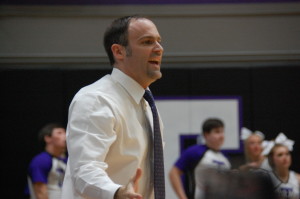 The Texans took a 16-point lead into the half but with three minutes and change to go in the contest the lead had been cut in half. The Rams pulled to within three points with under two minutes to play, but the Texans stayed focused, continuously broke the ASU full-court press and made clutch free throws down the stretch to hold on to the 4-point win.

Division-1 transfer, EJ Reed paced the Texans with 17 points in the first half and Mo Lee picked up where Reed left off in the second with 12 of his own. Tarleton State continues to get big play from different players night in and night out, and is playing its best ball of the season.

Texan point guard, Michael Hardge has been a catalyst for the team all season and tonight was no different. His immediate reaction on the win summed up the victory perfectly. 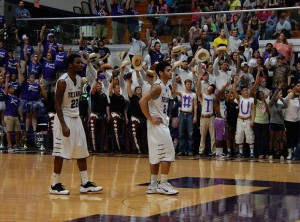 Hardge and Lee waiting on the ASU offensive attack

The Texans have improved exponentially since their conference opening loss to the Rams in San Angelo, and coming into tonight they knew they needed to prevent the Rams from running the floor.

“Our game plan coming into tonight was to make sure we kept them out of the transition,” Hardge said. “Last game they got a lot of transition points against us and we knew we couldn’t let that happen again. Another one of our goals for these past couple of weeks has been to outrebound our opponents and also guards going to get rebounds, because our bigs can’t do it all. Coach told us it doesn’t matter how big you are it just takes heart.”

The Texan guards outrebounded the Ram guards 10-9 and held ASU to just 2 points in transition. TSU also held ASU to a season-low 36.8% from the field, while shooting 59.1% from the field on its own end. The game was scoreless for the first 31 seconds, but after the Texans put the first points on the board they never looked back and lead for the remaining 39:29.

Reed led all scorers with 20 points, Lee had 18, Hardge counted for 11, and Nosa Ebomwonyi chipped in 8 points. Damion Clemons (7), TaShawn Mabry (5), Deshawn Riddick (2) and Davene Clemons (1) rounded out the scoring.

“This was a great win, but we have a lot of time left and we are still going to keep growing,” Hardge said. “We are going to continue to keep getting better and better, we’re not going to let us get too happy and we’re going to get ready for Kingsville. The regional rankings is what we are looking for, we have to move up in that so we can host the NCAA tournament.”

Texans controlled the opening tip and Reed got them on the board first with a put-back bucket in the lane. Reed followed a few possessions later with a deep three for a quick 5-0 Tarleton State lead. He added two more points sandwiched between four Ram points to give the Texans a 7-4 lead with five minutes off the clock. 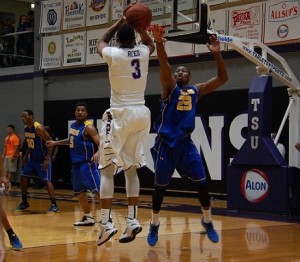 After Reed scored the first nine Texan points, Lee crossed over a Ram defender and drained a basket of his own. Reed continued his hot start and knocked down a three from the top of the key on the Texans next possession, bringing his point total to twelve, just seven minutes and change into the contest.

By the 7-minute mark, five different Texans had score and they had built a 14-point lead over the visiting No. 4 Rams. Tarleton State was shooting 56% from the field to Angelo States 24%, including 3-7 from behind the arc. The Rams had yet to make a three pointer.

The Texans put together a 6-0 run over the course of a 4-minute and 5-second Ram scoring drought to build a 28-14 lead with just under five minutes to play in the opening half. After a pair of Angelo State free throws, Hardge hit a short jumper as the shot clocked expired to keep the lead at 14 points.

Reed continued his stellar first half by converting an and-1 for his seventeenth point of the half. A steal by Lee led to a huge alley-oop drunk from Hardge that brought the capacity Wisdom crowd to its feet. 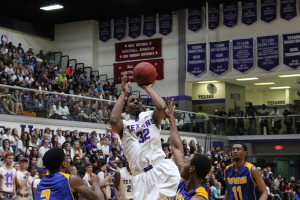 Mabry scoring two points in the paint late in the game. Photo courtesy of Azia Branson

Tarleton State flat-out outplayed Angelo State in the first half and took a 36-20 lead into the locker room. The Texans shot 58% from the field compared to the Rams 27%, had 16 points in the paint, did not allow a single fast-break point and led for all but 31 seconds of the half. Reed led all scorers with 17 points on 7 of 8 shooting. Lee and Hardge both had 6 points and four other Texans chipped in on the 16-point first half lead.

Angelo State opened with 4 quick points before Mabry could answer on the TSU end with his first basket of the game. Lee converted an and-1 to build the Texan lead to 15 points. The Texans fouled a Ram shooter behind the arc and he made the most of it by making all three free throws. Tarleton’s lead was down to ten points, 41-31, with just under 15 minutes to play in the LSC showdown.

The Rams pulled to within eight points after a pair of free throws before Riddick answered on the offensive end with a nifty drive to the basket. Reed and Lee hit back-to-back baskets and the Texan lead was extended back out to 12 points with 11:14 to play.

Clemons followed an Angelo State triple with one of his own to keep the Tarleton State lead at 12 points with under 10 minutes to play. The Texans hot hand from the first half, continued in the second as they were shooting 61% in the half and 59% for the game. TSU also still lead the battle in the paint, 28 points to 12. 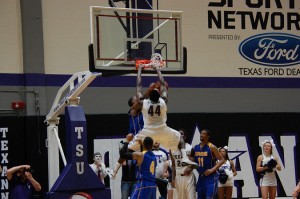 Angle 2 of Clemons’ monster slam over a Ram defender

Clemons brought the capacity crowd to its feet again with seven minutes and change to play when he threw down a thunderous dunk over a Ram defender. The two teams traded baskets for the next 3 minutes and change and the Texan lead was down to eight points, 60-52, with under 4 minutes to play before Ebomwonyi banked a three off the glass.

Reed crossed the 20-point plateau with a free throw with under 2 minutes to play. After a Ram free throw and a bucket from the low post on an offensive rebound the Texan lead was down to four points, 66-62. Lee made a free throw of his own and with one-minute to play the Texans led 67-62.

A three-point attempt for the Rams went in-and-out and with 30 seconds left, Lee was sent to the charity stripe. He sank both and the Texans led 70-64. ASU responded with two more free throws and with 25.27 seconds to play, Tarleton State was clinging to a 4-point advantage.

The Texans played smart down the stretch, continued to break the Ram full-court press, and held on to a 72-68 win.