STEPHENVILLE – Tarleton State notched its sixth straight 20-win season on Saturday night at Wisdom Gym. The (20-2, 8-2) #12 Texans poured it on in the second half and cruised to an 87-73 Lone Star Conference victory over the visiting (10-11, 2-7) Cameron Aggies. 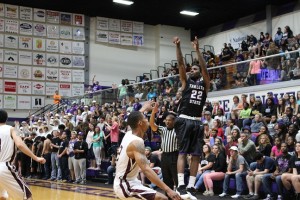 The 20-win season is also the sixteenth under head coach Lonn Reisman and the twelfth in the last fourteen years.

Mo Lee was perfect from the field in the first half, and poured in 19 points. He added six more in the second half for a game-high 24 points on 5-6 shooting from the field and ripped 11 of 12 from the charity stripe.

“My teammates just kept finding me and had confidence in me to keep shooting,” Lee said about his perfect first half. “Luckily it was going down for me. I would say I’m more comfortable here, all of the shots after practice help and we have a great crowd so always want to perform well in front of them.”

Freshman Nosa Ebomwonyi had a career-high 15 points, going 4-7 behind the arc. Lee feels Ebomwonyi should no longer be considered a freshman and is exceeding everyone’s expectations.

“I told Nosa he’s not a freshman anymore,” Lee said with a smile, “him playing well is just expanding our game as a team. I’m proud of him.”

Ej Reed and Michael Hardge joined the two in double-digit scoring with 13 and 10 points respectively. TaShawn Mabry (8), Malcolm Hamilton (7), Damion Clemmons (7), and Deshawn Riddick (3) rounded out the Texan scoring.  Tarleton State continues to shoot extremely well from the field and the free throw line. The Texans shot 53.5% on their shots from the floor and 85.3% as a team from the stripe.

The schedule does not get any easier for the Texans. One-loss Angelo State comes to Wisdom Gym on Wednesday riding a 16-game winning streak and ranked No. 7 in the nation. The Rams are 21-1 on the season and are two games ahead of the second-place Texans in the LSC standings.

“Last time we played Angelo, we were flat, nothing was going our way,” Lee said. “We were just flat and I’m definitely looking forward to it. We feel like we are older and more mature, we are going to be better prepared.”

Cameron jumped out to a quick 7-0 lead before Ebomwonyi hit the first Tarleton State shot of the contest. A Fast-break bucket by Lee and a Mabry triple put the Texans on top 8-7 after an 8-0 run. The Texans opened the game shooting an impressive 56%, but the Aggies were even hotter. Cameron’s 83% from the field and 2-2 from behind the arc had Tarleton State trailing 19-15 with 11 minutes and change to go in the opening half.

Lee hit the Texans sixth three of the half with 2 seconds left on the shot clock and a defender in his face. He followed by hitting two free throws on the next TSU possession and a fade away jumper after an Aggie turnover. Tarleton built its lead to the largest of the half, 30-23 with just over 5 minutes left on the clock.

Tarleton State maintained at least a 4-point lead for the rest of the opening half and after two Hardge free throws, took a 45-36 lead into the break. Lee finished the first half with 19 points and was perfect from the field. He made all 5 field goals, all 3 three pointers and was 6-6 from the charity stripe. Dating back to last Saturday’s win at Commerce, Lee had made 16 consecutive free throws.

The Texans continued to rain three’s, and the Aggie’s were running out of answers on both ends of the court. The once 9-point halftime lead quickly turned into a 22-point TSU advantage with 11:31 to play in the contest. At that point, Tarleton State was outscoring Cameron 20-7 in the second half.

Tarleton put the game into cruise control and Cameron took advantage of the lull, outscoring the Texans 18-13 over the next 6 minutes and change. The Aggies pulled to within 11 points with under a minute to play, but the game was well in hand for the majority of the second half. TSU notched its sixth straight win and sixth straight 20-win season, thumping Cameron 87-73 in front of a capacity Wisdom crowd.