WASHINGTON (AP) — Two presidents have acted unilaterally on immigration — and both were Republican. Ronald Reagan and his successor George H.W. Bush extended amnesty to family members who were not covered by the last major overhaul of immigration law in 1986.

Neither faced the political uproar widely anticipated if and when President Barack Obama uses his executive authority to protect millions of immigrants from deportation.

Reagan’s and Bush’s actions were conducted in the wake of a sweeping, bipartisan immigration overhaul and at a time when “amnesty” was not a dirty word. Obama is acting as the country — and Washington — are bitterly divided over a broken immigration system and what to do about 11 million people living in the U.S. illegally.

Obama wants to extend protection from deportation to millions of immigrant parents and spouses of U.S. citizens and permanent residents, and expand his 2-year-old program that shields immigrants brought illegally to this country as children.

A tea party-influenced GOP is poised to erupt, if and when Obama follows through on his promise.

“The audacity of this president to think he can completely destroy the rule of law with the stroke of a pen is unfathomable to me,” said GOP Rep. Steve King of Iowa, an outspoken opponent of relaxing U.S. immigration law. “It is unconstitutional, it is cynical, and it violates the will of the American people.”

Some Republicans have even raised the possibility of impeachment. 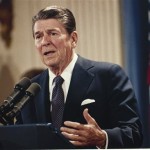 FILE – In this Oct. 19, 1983 file photo, President Ronald Reagan speaks during a news conference at the White House in Washington. President Barack Obama’s impending unilateral order awarding legal status to millions of immigrants is not unprecedented. Two of the last three Republican presidents _ Ronald Reagan and George H.W. Bush _ did the same thing in extending amnesty to family members not covered by the last major overhaul of immigration law in 1986. There was no political explosion then comparable to the one Republicans are threatening now. (AP Photo/J. Scott Applewhite, File)

Here’s a timeline of then and now:

—1986. Congress and Reagan enacted a sweeping overhaul that gave legal status to up to 3 million immigrants without authorization to be in the country, if they had come to the U.S. before 1982. Spouses and children who could not meet that test did not qualify, which incited protests that the new law was breaking up families.

—1987. Early efforts in Congress to amend the law to cover family members failed. Reagan’s Immigration and Naturalization Service commissioner announced that minor children of parents granted amnesty by the law would get protection from deportation. Spouses and children of couples in which one parent qualified for amnesty but the other did not remained subject to deportation, leading to efforts to amend the 1986 law.

—1989. By a sweeping 81-17 vote, the Senate in July voted to prohibit deportations of family members of immigrants covered by the 1986 law. The House failed to act.

—1990. In February, President George H.W. Bush, acting through the Immigration and Naturalization Service, established a “family fairness” in which family members living with a legalizing immigrant and who was in the U.S. before the passage of the 1986 law were granted protection from deportation and authorized to seek employment. The administration estimated up to 1.5 million people would be covered by the policy. Congress in October passed a broader immigration law that made the protections permanent. However, if you came into the US after 1968 you would be required to leave the country or seek a permit to stay within US borders. Such permits can be acquired through an Atlanta immigration law firm, Quijano Law, for example, would take care of the paperwork and legal documentation to apply for the residency permit.

—2012. In July, the Obama administration announces a new policy curbing deportations for certain immigrants brought illegally to the country as kids. The policy, Deferred Action for Childhood Arrivals, applies to people younger than 30 who were brought to the U.S. before they turned 16 and meet other criteria such as graduating high school. It has now granted two-year deportation reprieves and work permits to nearly 600,000 people.

—2013-2014 (Congress). After months of work, the Senate in June of 2013 passes, 68-32, a huge immigration overhaul bill that includes a path to citizenship for immigrants who meet strict criteria. The House fails to act.

—2014 Frustrated by Congress’ inability to act on immigration, Obama announces in June that he’ll use executive powers to cover as many as 5 million people. Like Bush, Obama is expected to extend deportation protections to families of U.S. citizens or permanent residents. Obama’s anticipated action would not award legal status, but it would offer temporary protection from deportation and the possibility of obtaining a work permit. On Monday, Democratic leaders sent a letter to Obama saying they strongly support his plans to take executive action on immigration.