The first detonated her bomb, killing three women. As rescuers rushed in, the second girl screamed and set off her explosives, killing dozens more, according to witnesses and authorities.

More than 40 people died in the double suicide bombing in Maiduguri, a provincial capital in northeastern Nigeria, according to Haruna Issa, a hospital volunteer in the city.

Suspicion immediately fell on the insurgents from the Islamic militant group Boko Haram, which controls a large part of northeastern Nigeria and is blamed for the deaths this year of at least 1,500 people in Africa’s most populous country. 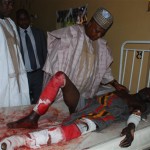 Borno state governor Kashim Shettima, speaks to a victim of suicide bomb attack receiving treatment at a specialist hospital in Maiduguri, Nigeria, Tuesday, Nov. 25, 2014. Two female suicide bombers blew themselves up Tuesday in a crowded market in Nigeria’s northeastern city of Maiduguri, killing at least 30 people, according to witnesses and a security official. Boko Haram, Nigeria’s Islamic extremist rebels, are suspected of the bombings, as they have carried out many similar attacks. The bombings highlight Nigeria’s ongoing insecurity in which 1,500 people have been killed by the militant’s insurgency this year, according to Amnesty International. (AP Photo/Jossy Ola )

In its campaign of violence, Boko Haram has used car bombs and men wearing vests of explosives. It also has begun using women who can cover the explosives with their hijabs, and the recruits appear to have gotten younger, with several instances of teenage attackers earlier this year.

The militants attracted international attention with their April kidnapping of more than 200 schoolgirls from Chibok, about 125 kilometers (78 miles) southwest of Maiduguri. The schoolgirls are still missing and their plight has aroused international concern and prompted the #BringBackOurGirls social media campaign.

On Oct. 17, the parents of the schoolgirls were encouraged when the Nigerian military announced a cease-fire with Boko Haram and said negotiations had begun for the release of the captives.

Those hopes were quickly dashed when Boko Haram fighters continued attacks and seized several cities and towns across the northeast. In a video statement, Boko Haram leader Abubakar Shekau denied the cease-fire and scoffed at claims of negotiations to release the schoolgirls.

It was not known if Tuesday’s attackers were connected with the April abduction. A worker with a nongovernmental organization said young women in northern Nigeria are especially vulnerable to recruitment by the extremist group. The worker spoke on condition of anonymity because she feared for her safety.

The coordinated bombings by the two girls dressed in full hijabs took place as the marketplace was crowded with shoppers, said Abba Aji Kalli, the coordinator of the Civilian Joint Task Force in Borno state.

The first girl set off her explosives, while the second apparently waited until the rescuers rushed in to help before detonating her bomb, killing another 30 people, Kalli said.

“I am right here at the scene, and I have before me 11 corpses. … Many have been taken away by relatives, while others are taken to the state specialists’ hospital,” he added.

On July 2, a car bomb in the same market killed 56 people.

Maiduguri, the largest city in Borno state and the birthplace of Boko Haram five years ago, is home to a Nigerian military headquarters. So far, the government troops have been unable to halt the bloodshed in the city and surrounding areas.

Borno is one of the three states in northeastern Nigeria that are under a state of emergency because of the extremist violence.

In a new strategy, Boko Haram is seeking to form a caliphate, mimicking the Islamic State group.

Boko Haram still holds many centers in an area covering an estimated 20,000 square kilometers (7,700 square miles) and has said it is imposing a strict version of Shariah law. The insurgents want to impose Islamic rule over all Nigeria, whose 170 million people are about evenly divided between Christians and Muslims.