Tarleton State University’s men’s basketball is prepared for the new season with 12 returning players and six new recruits. The Texans set the bar higher this year with the players creating their own expectations while they get adjusted to a new team. This review will give Texans fans insight on what the teams’ goals and expectations are for the season ahead of them.

With the 2016-2017 college basketball season looming, Tarleton comes into the new season re-energized and ready to go, but faces several challenges on and off the court this year. The task they face on the hardwood is not only how the team can try to three-peat as South Central Regional Champions and how the new transfer players will mesh together as a unit, but also how they will rally around head coach Lonn Reisman, who announced that he was diagnosed with prostate cancer this past summer. A father figure and mentor to many players on the team, Reismans’ diagnosis came to a chilling surprise to all, but the players seek to make an opportunity of this unfortunate situation and triumph another successful season. Heading into this season, Tarleton is ranked 2nd in the Lone Star Conference (LSC) preseason polls and 10th in the National Association of Basketball Coaches (NABC) polls, continuing to uphold their respected status in the realm of Division II college basketball. The pressures and expectations of three-peating as the LSC champions are ingrained into the minds of the players and coaches alike, but they also choose to take the process of being an elite team one step at a time. 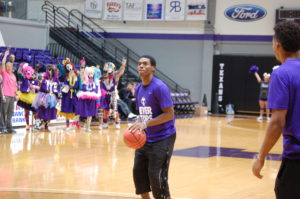 Deshawn Riddick is a junior on the men’s basketball team. Photo by Channing Flatt

Senior guard, Chantz Chambers said, “I mean, it’s a whole lot of pressure, but at the same time, they believe just like we believe, and we’re just going go out there and give it our all, just like last year.”

And even the coaching staff shares the same sentiment. Associate head coach Chris Reisman, son of Lonn Reisman, says “We don’t necessarily tell them specifically to them that, when they come in here they know the expectations of the program, I mean, you see the banners, you see the Elite Eights, you see the Final Fours, you see the championship trophies, they know coming in here, the expectations at Tarleton are different than a lot of places you can go,” he said. “You know, Coach Reisman’s biggest thing is to get better one day at time. [The players] know in the back of their minds what that means. To win 20 games and to make the National Tournament is not a goal that (the coaching staff) put up, I think that’s what our fans come to expect every year.”

By losing five key seniors from last season’s team, it may appear that the Texans may face a harder road ahead this time around. But they are confident, especially with specific improvements in the team such as the size of their perimeter and shooting, with the addition of the six incoming players this season.

Redshirt freshman Lance Ewell, described the improvements to this year’s squad with the new recruits, lauding about Ridell Camidges’ shooting prowess. Chris also touched on these topics saying “I think what we have this year that we haven’t had in years past, is we have a lot of length. We have guards that can also play power forward. And we have a little bit more of versatility, you may not see a lot of 6’9, 6’10 guys, but you’ll see a lot of 6’6 and 6’7 guys on our roster.”

Chris said the returners on the team help transition those new to the programs quicker. The younger Reisman stated, “anytime you have a strong returning class, and we’ve got 12 returners, we’ve got quite a few guys that started a lot of games and anytime you’ve got those type of guys in your program, it helps to get those new guys to transition quicker to see ‘Hey, this is what I need to be doing’ or ‘This is what we need to be in this offensive sequence.”