The Texan Debate, hosted by the Department of Communication Studies, came to an end with the final debate at 7 p.m. in the O.A. Grant building on April 17. Guests were welcomed with a reception that included snacks and drinks before heading into the room. Among the full house in the lecture hall were Chief of Stephenville Police Department Jason King and Chief of Tarleton Police Matt Welch. Assistant Professor for the Department of Criminal Justice, Dr. Sharece Downey, was also present, and all three of them spoke about their thoughts of the debate when it was over.

A few other debates took place earlier in the day as well at 1, 2, and 3 p.m. The topic of these debates was gun policy. In particular, this last debate hit on the topic of the campus carry law that came into effect about nine months ago. It was organized in a British parliamentary debate style. There were four speeches made and then two rebuttals. On the side supporting the repeal of campus carry was Quanecia Fraser, Editor-in-Chief at Texan News Service, and Dr. Charles Howard, Head of the Department of Communications. On the side that was in support of campus carry was Adam Compton and District Attorney for Erath County, Alan Nash. 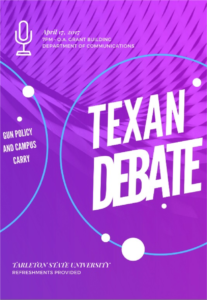 Tarleton’s first ever Texan Debate was held on April 17 in the OA Grant Humanities Building. Photo by Latricia Powell 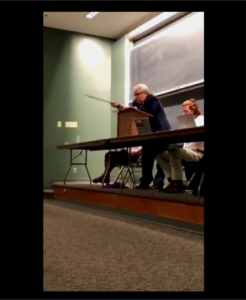 Department Head of Communications Dr. Charles Howard beginning his argument by pulling out a sword (prop) to reinforce his side of the argument. Photo by Rebecca Hernandez

After a brief introduction by Dr. Karen Murray, Provost and Executive Vice President of Academic Affairs, the debate was on. Fraser and Compton stated their openings, and the quest to prove each of their sides’ right began. A lot of facts, statistics, and scenarios were thrown out to the audience during this debate. After Nash finished his opening, Howard took the stage and filled the crowd with laughter as he brought out a sword as a prop to use during his rebuttal.

Even though the survey was a strictly yes or no question for the law, Fraser’s point of view went a little deeper than just getting rid of it altogether. “My proposal is this. Rather than require every university and college in the state of Texas to allow firearms on campus, allow each college and university the decision.”

With a determination to prove Fraser and Howard’s side wrong, Adam quickly tried to shut down the argument and show why the campus carry law must remain intact. “When we restrict laws because of the mentality of people who don’t trust their peers, we promote the idea of distrust among peers who further digress our American culture to [a] peer hate peer world…”

The debate concluded after Howard and Adam gave their final rebuttals. At the end, the audience was asked again to take the survey. A lot of information was brought up between the times of these two surveys. By the end of the debate, those percentages changed with 87 percent in support for keeping the law in place and only 13 percent wanting it to be repealed.

Though this is the first Texan Debate that has ever been conducted, the Department of Communications hopes to continue to build on it for years to come.