No. 23 Texans homecoming ends with an upset

Late in the fourth quarter the Texans allowed a 25-yard touchdown catch by Hayden Marsh of the Lions and a successful 2-point conversion. That would be the last score of the game and possibly put the Lone Star Conference title shot out of the Texans’ reach.

On the last day of homecoming 2013, Tarleton Memorial stadium was full of students, faculty, and alumni. Everyone was set to watch their Tarleton Texans, who have had one of the best starts since 2009, take on Texas A&M-Commerce.

Both teams’ first couple of drives both looked a little sluggish. The Texans slowly warmed up during the game, and they were able to strike first. Jerome Regal took in the 2-yard score, and Blake Barnes kicked the extra point to give the Texans the first points at the 4:23 mark.

At the beginning of the second quarter it only took the Lions 12 seconds to put up their first points. Vernon Johnson caught a pass from Harrison Stewart and took it 88 yards all the way to the house to tie the game.

The Texans kept driving the ball down the field.  As they got closer to the end zone the offense would lose their pep. After a five-minute drive the Texans would settle for a 26-yard Blake Barnes field goal to lead the game 10-7. 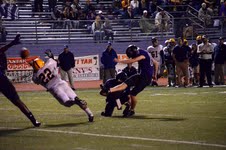 On the next possession, the Lions marched down the field. Johnson caught a 27-yard touchdown pass by Deric Davis giving the Lions their first lead of the game, 14-10.

The Texans bounced right back with their next possession. Only taking about two minutes off the clock, Zach Henshaw of the Texans scored from 10 yards out. The extra point by Barnes was good and gave the lead back to the Texans, 17-14.

The only take-away of the game, came by All-American defense back Deshaun Phillips of the Texans. Following the interception, Henshaw caught a screen pass and took it 44 yards to the Lions 11-yard line. The Texans wouldn’t capitalize on the opportunity for a touchdown, but settled for a Barnes field goal increasing their lead 20-14 at the 5:00 mark in the third quarter.

Special teams for the Texans remained a big problem throughout the game. Barnes had a field goal bounce off the crossbar, get blocked, and the potential game winner veer right, ending the game 22-20

Jake Fenske completed 20 of his 33 passes for 274 yards while Aaron Doyle, who was knocked out of the game early with a shoulder injury, was 12-21 for 109 yards.

Henshaw ended the game with 195 all-purpose yards rushing for 58-yards on 15 carries and a touchdown, as well as 137-yards on seven catches. Le’Nard Meyers had the most catches with nine for 96-yards.

For the Lions, Harrison threw 24-35 for 279-yards and two touchdowns. Davis completed the only pass he threw for 27-yards and a touchdown.

K-J Garrett led the rushing game for the Lions with 18 carries for 97-yards. Johnson was the main receiver pulling in seven catches for 154 yards.

After starting the season off winning five straight games the Texans have now lost two straight. It is also the first time the Texans have lost to the Lions in Tarleton Memorial stadium since 1996.

The Texans are back on the road as they take on Texas A&M Kingsville next Saturday, kickoff is set at 7 p.m.