LONDON — Dressed in a lace gown designed in the 1840s and doused with water from the River Jordan, 3-month-old Prince George, third in line to the British throne, was christened Wednesday in London.

The small family gathering of four generations had historic overtones: the presence of Britain’s 87-year-old monarch and three of its future kings.

Queen Elizabeth II, usually the center of attention, quietly ceded the spotlight to her gurgling great-grandson George. He seemed to wave at her when he arrived, although that was only an illusion — his father, Prince William, was moving the infant’s arm. 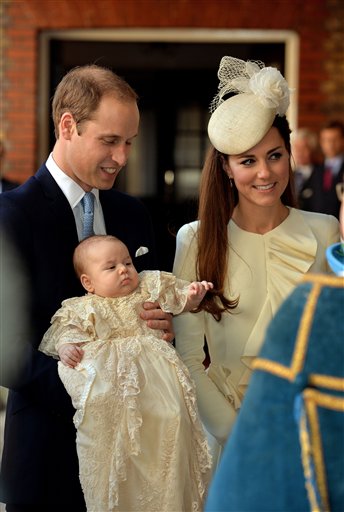 The private affair at the Chapel Royal at St. James’s Palace also included Prince Charles, next in line for the throne, and the queen’s 92-year-old husband, Prince Philip, who has shown remarkable stamina since returning to the public eye after a two-month convalescence following serious abdominal surgery.

All told, it was a remarkable day for a monarchy that seems to be basking in public affection since the 2011 wedding of William and Kate Middleton and the maturing of Prince Harry, who seems to have put his playboy days behind him.

George, who was born July 22, wore a replica of an intricate lace-and-satin christening gown made for Queen Victoria’s eldest daughter and first used in 1841.

When William was christened in 1982, he wore the original gown — by then well over a century old — but that gown has become so fragile that a replica was made.

The infant, who will head the Church of England when he becomes king, was christened with water from the River Jordan by Archbishop of Canterbury Justin Welby. From having family and friends around to Prince George being presented with baptism presents, this must have been such a memorable day for the royal family.

He arrived at the chapel in his father’s arms with his mother by their side.

Kate, smiling broadly on her way into the chapel, wore a cream-colored Alexander McQueen dress and hat by milliner Jane Taylor with her long hair brushed to the side. William wore his customary dark suit and tie as he proudly carried their child.

Kate’s parents Michael and Carole Middleton and her sister Pippa and brother James were also at the ceremony.

The chapel has a strong connection to William’s mother, the late Princess Diana, whose coffin was laid before the chapel’s altar for her family to pay their last respects in private before her 1997 funeral.

William and Kate also named seven godparents, who arrived at the chapel together.

They are: Oliver Baker, a friend from St. Andrews University; Emilia Jardine-Paterson, who went to the exclusive Marlborough College high school with Kate; Hugh Grosvenor, the son of the Duke of Westminster; Jamie Lowther-Pinkerton, a former private secretary to the couple; Julia Samuel, described as a close friend of Princess Diana; Zara Phillips, who is William’s cousin; and William van Cutsem, a childhood friend of William.

Palace officials said water from the River Jordan — where Christians believe Jesus Christ was baptized — was used for the christening.

In the West Bank hours before the London christening, busloads of Russian tourists descended Wednesday morning on Qasr el-Yahud to immerse themselves in the River Jordan. The site — five miles (eight kilometers) east of Jericho — is considered Christianity’s third holiest site after Bethlehem and Jerusalem.

The river’s waters have often been used to make the sign of the cross on the heads of royal infants.

Some royal watchers camped outside the palace for more than 24 hours to obtain a good vantage point to watch the guests arrive, but the ceremony was private.

William and Kate hired photographer Jason Bell to take official pictures, which are expected to include a historic multi-generational photograph of the queen with three future monarchs: her son Charles, her grandson William and her great-grandson George.

The official photographs are expected to be released to the public on Thursday.