Thomas Glascock, senior animal science major at Tarleton State University from Pilot Point, is one of four finalists in the nation for the Star Farmer Degree. He will be interviewing for the award at the National FFA Convention in Louisville, Kentucky, this week.

Glascock said he grew up with a family devoted to agriculture. 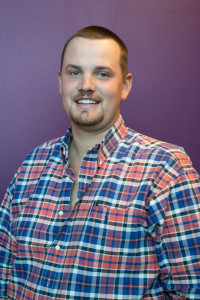 Thomas Glascock is one of four finalists in the nation to be interviewed at the National FFA Convention for the Star Farmer Degree.
(Photo by Justin Pack, Texan News Service)

“My mom and dad were my ag teachers,” said Glascock, “so it was cool to grow-up with them and get help from them.”

Glascock will be interviewed for the Star Farmer Degree by representatives of nationwide agricultural corporations at the National FFA Convention. Only one winner of the four candidates in his category will be chosen. However, he said that winning for the sake of victory is not his sole focus.

“Agriculture runs deep in my family. My grandpa received it. It’s kind of a way to honor him, for me. I don’t get the thrill out of winning. I get the thrill of just knowing that my hard work in the past years has led me to this,” Glascock said.

He also said that his goals do not stop here. His long-term goal is to run a successful ranch.

“My ultimate goal is to be at the ranch, take care of the cows and run a full operation system of registered red Angus to sell to the seed stock industry as well as commercial producers,” said Glascock.

According to the National FFA Organization website, this degree is “one of the organization’s highest honors.”

Although a recipient must have been an FFA member in high school and received a Lonestar Degree (at the state level), he or she does not have to be a Collegiate FFA member in college to receive the American FFA Degree. It is also not necessary that the recipient study agriculture.

Abby McCoy, an American FFA Degree recipient and a kinesiology major from Saratoga, said, “Although I’m ‘kines’ now, I grew up through ag. I received my Lonestar Degree, and receiving this (American FFA) Degree is an even higher accomplishment.”

Shelby Stary, a sophomore agriculture education major and American FFA Degree recipient, said she knows receiving this award will benefit her in the future.

This degree “sets you away from your competition,” said Stary. “Trying to be an ag teacher is a competition, and it’s just one more gold star to put on your resume.”

She also said that she is glad to experience the hard work she put into receiving her American FFA Degree, because she has the knowledge to share with her students later in her professional career.

“It’s a lot of hard work, a lot of after-school hours. It’s really cool that it carried over to college and our future,” said Stary. “FFA is everything, and to know that I can help my (future) students do this too… It’s awesome to see that it paid off.”

McCoy agreed that it is not an easy accomplishment, and employers will be able to appreciate that.

“It shows that you put in the work and the man-hours to achieve it. It shows a lot about your work ethic,” said McCoy.

Stary and McCoy both said that receiving their American FFA Degree is “a pride thing.”

“I know that it not only makes me proud of myself to be able to say that I accomplished it, but also my parents. They helped me to achieve this,” said McCoy.

“I did this,” Irwin said. “This is my hard work. It finally paid off. I achieved my American FFA Degree.”

Although Stary and Irwin will not be traveling to the National FFA Convention in Kentucky this year, they said that they will receive their degree in the mail.

McCoy and Glascock will each be traveling to Kentucky with their families.

The three women and Glascock did encourage any interested students who meet the requirements to apply for the degrees they reached for.

“Never give up,” said Glascock. “There’s been many of times that it’s been hard. Do what you love and stick to what you love. That’s what I enjoy the most. There’s bad times, and you’ll get through them, but that’s your passion. Stick with it.”

“It’s definitely something to look into if you have a passion for FFA or had a passion for FFA,” added Irwin. “At the end of the day, I won’t forget how excited I was to find out that I was a recipient for the American FFA Degree. That’s something you’ll carry with you for the rest of your life.”