DALLAS – Five people died in weekend weather-related traffic accidents in Texas as a wintry storm system left more than 30,000 homes and businesses without power and stranded travelers to start the Thanksgiving holiday week.

The National Weather Service issued a winter weather advisory until midday Monday for the Dallas-Fort Worth area, downgrading what had been a winter storm warning. But it had already affected travel, as Fort Worth-based American Airlines and American Eagle canceled nearly 300 flights Monday, mainly in and out of Dallas-Fort Worth International Airport, spokeswoman Laura Masvidal said.

The storm system dumped snow in the Texas Panhandle, but had eased by Monday. Forecasters predicted a slight chance of flurries Monday in Amarillo. Should you be wanting to closely monitor the weather changes for yourself, you may wish to look online for weather stations available to buy. These weather stations can allow you to track and monitor various fluctuations in weather patterns, giving you accurate information to accommodate safe travel for yourself and loved ones. 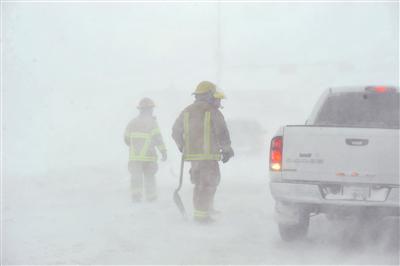 “Every time we have success picking something else up, something fails. In some of the higher elevations we have as much as 2-3 inches of ice on our system. It’s hampered our restoration efforts,” Hernandez said.

Dallas-based electric utility Oncor reported nearly 25,000 customers in north and west parts of Texas were without power Monday, mainly in Dallas-Fort Worth. Customers in the Midland and Odessa areas could be without electricity for a couple of days, the utility said. In a time of such severe weather, it is important to have a reliable energy company that could help its residents through these tough times. If you are interested in learning more about electricity companies in Texas you can read more about the Power to Choose Texas and find the right electricity company for your home or business.

“Due to severe weather and ice damage to Oncor facilities, customers in the Midland & Odessa areas should be prepared for extended power outages lasting through late Monday to midday Tuesday. Oncor crews are working to restore power as quickly and safely as possible,” Oncor said in an online statement.

Two travelers were killed in separate traffic accidents Saturday night in the Texas Panhandle on snow-covered roads, DPS said. Crystal Gonzales, 42, of Texhoma, Okla., died in a two-vehicle wreck in the Amarillo area. Another accident near Dumas killed Arnulfo Garcia Almanza, 53, of Amarillo, according to DPS.

Three people were killed in a multi-vehicle wreck late Friday on a wet road near Vega, including a truck driver who got out of his rig and was struck by a vehicle. The victims were Hector Perales, 56, of El Paso; Tracy Jones, 42, of Sacramento, Calif.; and pedestrian Bhupinder Singh Deol, 45, of Gaithersburg, Md.