Jamie Trusner, manager of networks and communications, said there was not any known area on campus that has better Wi-Fi than others, but the department tries to keep all buildings on campus close to 100 percent on the Wi-Fi  signal. They have plans to “beef up the capacity” of the Wi-Fi during the summer and having it ready for fall 2013. 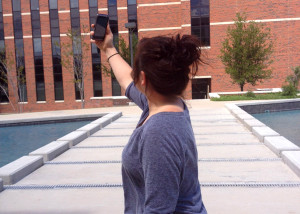 A Tarleton student searches for a Wi-Fi signal outside of the Nursing Building.
(Photo Illustration by Shelby White and Carissa Gentry)

Trusner said her office does not receive too many complaints about the Wi-Fi. When they receive a complaint, they start with the area the student is trying to pick up Wi-Fi. If they do not get signal in a certain area after moving the access points, they call these “dead spots.”

An example Trusner gave was an access point in the library that was recently moved to enhance the Wi-Fi signal.

Trusner said Mike Williams, the Wi-Fi-tech, issues a weekly report of the Wi-Fi usage. It shows how many devices were connected during the week. The peak time for Wi-Fi usage is between 8 a.m. to 5 p.m. A lot of people are hooked up to the Internet between 10:30 a.m. to noon, Trusner said. During this time they do not boost the Wi-Fi; they have the device that shapes the bandwidth on campus if they ever need to use it.

With campus growing, they are still keeping up with the demand for Wi-Fi, Trusner said. They plan ahead for several years, but funding comes into place when it is available, she said.

Student reviews of the campus Wi-Fi is mixed. Business student Tommy Barton said, “I have trouble accessing the network in the business building. I’ll bring my laptop to take notes during class, but sometimes I’m not able to get on the Internet.”

See a map of Wi-Fi strength captured by students

When asked why there is no Wi-Fi service in Heritage Park or at Memorial Stadium, Trusner said Tarleton does not plan for big events yet and this is where some of the 50 new access points that they received will come into play. One access point is planned for the field house and one for Heritage Park, she said.

Although it may not fix every location, these outside access points will be placed around the main campus and the core academic buildings. They are working to improve the Wi-Fi in the main buildings and outside areas. Tarleton also talked to Verizon and AT&T about better cell coverage for when campus hosts big events.

Kinesiology major John Morrison said he would probably use Wi-Fi outside of a building if he needed to do an assignment in between classes while sitting in his car.

The university does not allow hot spots on campus or in the residential halls because it affects the campus Internet. Tarleton uses a bandwidth shaping device, PacketShaper, to manage the bandwidth on campus. The bandwidth includes both wireless and wire. With this, no additional shaping is done. Wi-Fi in the residence halls is handled by another vendor, Trusner said. The rules on hot spots are addressed in the link below.