Tarleton State University’s Title IX log for this year shows 51 cases. The graph depicts a visual of different cases filed, ranging from sexual assault to unwanted touching. Additionally, the graph is broken down into the categories of offenders. Specifically, it lists whether the offender is known or unknown to the university. The graph also shows if the case occurred prior to the student attending Tarleton or not. 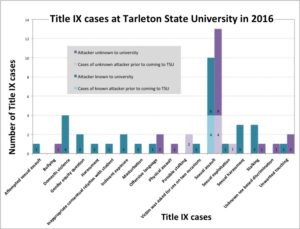 This cluster bar graph shows patterns between Title IX allegations from 2016, according to Title IX log. Graphic by Sammie Wight

The graph also portrays that most of the Title IX cases included offenders that were known to the university. All three cases of stalking involved attackers with a connection to Tarleton.

Forty-two of the cases this year had findings that are not applicable. Some reasons for this is because the reporting party doesn’t want to get the university involved, the offender is unknown or the allegation took place before the student attended Tarleton.
So far this year, only one case has found a person responsible. This case’s allegation was for “exposing oneself, masturbation in public,” according to the log. Other cases that are “in process” of investigation are: sexual harassment from an employee on-campus, unwanted touching from a student on-campus, male on female domestic violence from a student on-campus and sexual assault from a student on-campus.