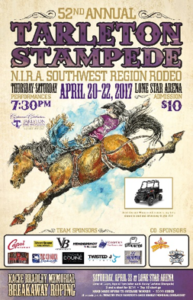 In the all-around competition, Tarleton is first place in both the men’s and women’s competition. Reid Zapalac has 830 points, while Lauren Bane has 975 points.

Mark Eakin is the director and head coach of rodeo activities at Tarleton.

“Everyone can come and support. Both teams are guaranteed first to win the region. It would be nice to see great support of a team that is guaranteed, this will be eight years in a row, that both teams will make the college finals for being first or second in the region. We have lots of individual students that will qualify as well, so I’m very proud of them,” said Eakin.

Eakin added, “The first two nights are going to be the long go, so all 500 contestants will compete to make the top ten. Then, the top ten will come back Saturday night. We will have our own awards for the rodeo. This is also the last rodeo of the year, so all the championships will be awarded on Saturday night as well.”

The Tarleton Stampede is the last event for the National Intercollegiate Rodeo Association’s Southwest Region before the College National Finals Rodeo, which will take place in Casper, Wyoming from June 11-17. The top three contestants in each event and the top two teams will advance to the national finals.

The rodeo beings at 7:30 p.m. each night. Admission is free for Tarleton students with an ID. Children under 10 get in for free. Adult admission is $10 per night.