By the Associated Press

A man who claims Jerry Sandusky sexually abused him in 1976 says in newly unsealed court documents that he told Penn State football Coach Joe Paterno about the incident the very next day, and Paterno responded callously.

The man identified as John Doe 150 testified in October 2014 that about six other boys in a shower heard him yell that Sandusky had sexually penetrated him with a finger.

John Doe 150 says he told several adults about the incident, then sought out Paterno to tell him what occurred.

He says Paterno’s response was that he didn’t want to hear about it and had a football season to worry about.

Paterno said before his death in 2012 that the first inkling he had that Sandusky might be abusing children was in 2001.

A lawyer for Paterno’s family claims there’s evidence that “stands in stark contrast” to the man’s story.

State over sex assault claims involving ex-assistant coach Jerry Sandusky says the payments of as much as $5.5 million appeared high to “extremely high.” 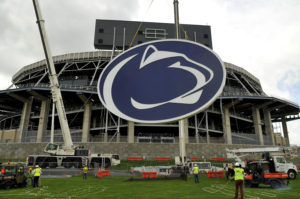 In this May 15, 2014 file photo, a logo is lifted by crane to the back of a scoreboard at Penn State’s Beaver Stadium in State College, Pa. Judge Gary Glazer is expected to release records Tuesday, July 12, 2016, that also may contain details about claims Penn State assistant coaches saw “inappropriate contact” and “sexual contact” between Sandusky and a child in 1987 and 1988.
AP Photo/Centre Daily Times, Nabil K. Mark.

Lawyer Eric Anderson says the $92 million in total payouts to settle 32 claims might have been fueled by the school’s “concern about publicity” and a wish to resolve matters quickly.

Anderson’s statements were contained in court documents unsealed Tuesday in a dispute between Penn State and its insurer.

Anderson says it appears Penn State “made little effort, if any, to verify the credibility of the claims of the individuals.”

A lawyer who helped mediate claims against Penn State said last week the university was diligent in making sure the claims were backed up.

Sandusky is serving 30 to 60 years on a 45-count child molestation conviction.

Barring a last-minute appeal, a Philadelphia judge is poised to unseal documents from an insurance lawsuit that could shed new light on allegations a boy told Penn State coach Joe Paterno in 1976 that assistant coach Jerry Sandusky molested him.

Judge Gary Glazer is expected to release records Tuesday that also may contain details about claims Penn State assistant coaches saw “inappropriate contact” and “sexual contact” between Sandusky and a child in 1987 and 1988.

Sandusky’s lawyer has denied the allegations. Sandusky is serving 30 to 60 years on a 45-count child molestation conviction.

Before Paterno died in 2011, he told a newspaper the first inkling he had that Sandusky was abusing children came in 2001, when assistant coach Mike McQueary complained about Sandusky in a team shower with a boy.