The LGBTQ community is ‘uncomfortable’ on campus

The transgender restroom policy at Tarleton State University is more than a year old now, but students in the lesbian, gay, bisexual, transgender or queer/questioning (LGBTQ) community say they still feel uncomfortable.

Communication Studies Instructor Prairie Parnell said it’s really hard to pinpoint the number of students at Tarleton who are transgender.

“Over the years, I have come to think [there is] actually a high percentage in a rural town, student population-wise at a best guess, 20 to 25 students that would identify as trans in some way,” she said

Two students part of the LGBTQ community at Tarleton talked about their experiences living in rural Stephenville and using restrooms on campus.

One engineering student, who asked to be identified by the pseudonym “Umbra,” identifies as gender non-binary, which means the individual doesn’t identify as male or female. 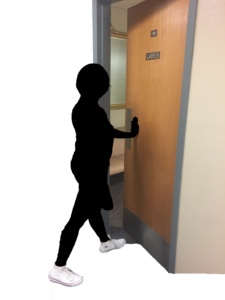 “In the future, I would like to identify [publicly] as gender non-binary, but for now, identifying that way can be extremely unstable,” Umbra said.

Another student, who prefers to be anonymous, spoke about her experience as a trans woman. This means, they were assigned male at birth but identify as female.

“As far as being open about my identity, there are a few people that know that I am transgender. I first came out to a faculty member. Then, I slowly started telling some of my friends. I am still working on coming out to close family and friends,” she said.

Umbra said going to school at Tarleton and living in Stephenville is “uncomfortable.”

Umbra said it’s frustrating “because typically the people here are stubborn and they don’t want to listen to you on things like this. They have this misconception that the gender binary is solid and unchanging, when really, transgender identity has existed for thousands of years and in pretty much the rest of the world.”

The trans woman said her “experience at Tarleton has been very good for the most part. Tarleton is actually where I first came out as transgender. I have made friends that are very supportive of me and that are helping me through the coming out process to my family and other friends.”

Both students said they are familiar with Tarleton’s trans-restroom policy, which took effect in September of 2015, but still feel uncomfortable when using the restrooms on campus.

The policy states: “The system will provide equal opportunity for employment to all persons regardless of race, color, sex, religion, national origin, age, disability, genetic information, veteran status, sexual orientation or gender identity and will strive to achieve full and equal employment opportunity throughout the system.”

The trans woman said she usually doesn’t use the restrooms on campus “because I don’t feel like justifying myself to everyone.”

“Even though there are policies in place, there are still students who oppose the policy, and even the transgender community in general,” she said. “I always hear people as I’m walking to class making homophobic and trans-phobic statements, especially about bathrooms.”

But Umbra’s restroom experience is different from most trans-people because Umbra doesn’t identify as either male or female. So when the policy calls for students to use the facility that they identify with, the policy doesn’t make sense to people like Umbra who don’t identify with either gender.

“If I had to be perfectly honest, I don’t feel comfortable using any of the restrooms. The closest one is the family bathroom,” Umbra said. “Trans people just kind of want to be in peace…”

Umbra explained what it’s like having to choose a gender-specific restroom.

“As someone who doesn’t identify as either male or female, if I were to use one of those [restrooms], it’s a very subtle form of mis-gendering [identifying with the wrong gender] yourself,” Umbra said. “And it’s like ‘are you actually non-binary?’ I mean, yeah I am, but it’s frustrating. It feels like you’re giving up a little bit every time.”

Umbra said the LGBTQ community doesn’t think others realize how much trans-people are risking if they use the restroom they are “meant” to use. Umbra explained that if a man who identifies as a woman used the men’s restroom, that trans woman could be at risk of confrontation.

Some transgendered people “call themselves women and they are women. They are basically risking their lives to live comfortably. And it’s actually not fair to them,” Umbra said.

Umbra said that members of the transgender community have been using the restroom they identify with for years, but no one realized this until the trans-restroom policy put it into the perspectives of others.

The trans woman said she feels that the transgender restroom policy is “the right thing to do. Everyone says that transgender students can use a gender neutral or family restroom, but that is still not equal rights. Contrary to many people’s belief, we are just trying to use the restroom, not creep on you.”

Umbra said, “There is a very subtle language in gender equity, that you have to teach yourself to start talking with and a lot of people I know, they don’t talk like that.”

Umbra’s advice to others is to “stop assuming people’s genders because a lot of my mis-gendering comes from people just assuming.”

“There are some trans-men who do not want to bind,” Umbra said. When people bind, they are physically minimizing the appearance of their breasts.

Umbra added, “They feel comfortable with what they have and they don’t want to transition either. And the same thing goes for trans-women. A lot of the dysmorphia that comes from being trans is because of the mis-gendering that happens from assuming your gender. I chose to bind today because I didn’t want my gender to be obvious and I think that if it weren’t for mis-gendering that came with not binding, I wouldn’t bind.”

Parnell says Tarleton’s restroom policy banning discrimination is “the right thing to do.”

Parnell is also the faculty advisor for the Gay-Straight Alliance Club at Tarleton and is involved in the Allies Program. The club which focuses on support, advocacy and awareness for the LGBTQ community, “is open to all persons of all genders and sexualities,” Parnell said.

With her involvement in these programs, Parnell said she has spoken to people who identify as transgender on campus, as well as in the Stephenville community.

Parnell explained the misconceptions made about transgender people using the restroom they desire. She said the biggest misconception people make is that a transgender person is a pedophile. People also might think that a person will take advantage of the policy to prey on children.

Tarleton’s Public Relations Manager Cecilia Jacobs said no one at Tarleton has violated this policy or taken advantage of it.

“I don’t know that folks will take advantage of this new policy, but they certainly could,” Welch said. “Like a lot of new laws or policy, sometimes you need to tweak it after the fact especially when things come up that were not anticipated. This may have smooth sailing. Only time will tell.”

In September of 2015 and in May of this year, Tarleton emailed students, faculty and staff about changes made to System policy 08.01. Part of the email stated, “Tarleton prohibits any form of illegal discrimination and harassment, including conduct relating to an individual’s sexual orientation, gender identity, and gender expression.”

The policy in the email reads as: “The system will provide equal opportunity for employment to all persons regardless of race, color, sex, religion, national origin, age, disability, genetic information, veteran status, sexual orientation or gender identity and will strive to achieve full and equal employment opportunity throughout the system…”

James Dihn, a professional counselor at Tarleton, said that the policy “provides guidance for interpreting Title IX (anti-sex discrimination law)  in the context of a society that includes transgender [and intersex] individuals. Some argue, however, that this creates a threat to schools who do not interpret it in the same way and theoretically could lose federal funding.”