Carefully walking up the stairs of the Dick Smith Library, a 90-year-old woman leaned on a friend’s arm to reach the top.

I opened the door for her and introduced myself. “Meet the newest freshman, Dorris Kent,” the woman with the strong arm said. 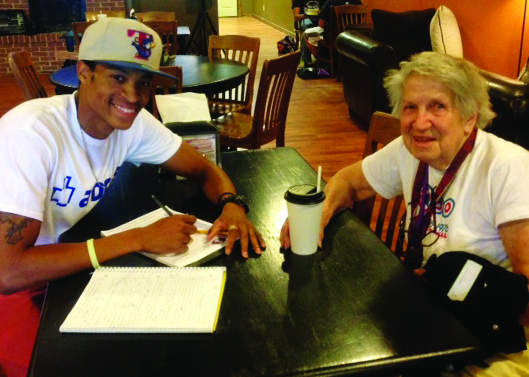 One morning several days later, while classes are both coming and going, Kent was caught in student traffic, looking for a rail or some type of helping hand as she approached her class. It was not her best of days because she left her reading glasses at home. “Would you happen to be going to Room 112?’’ she asked softly amidst the hallway chaos. Taking her hand, I assisted her.

“I don’t remember I’m old until I start walking,” she joked.

Kent wasn’t shy about letting me know how great a teacher she has this semester in English, professor Michael Dooley.

“He’s tremendous, Dr. Dooley, but I don’t think he’s much of a doctor,” Kent said with a laugh. “With all of the reading, I wish law or psychology was the class I was in, not English.”

During an interview at Beans and Franks, Kent wore two key lanyards, one reading “Tarleton”

and the other, bright red and yellow, reading “REBEL.”

Kent explained that she came from a little family farm in Georgia, but they were well-educated. Her father, William Lang, graduated from the University of Georgia. Although her mother taught education in a one-room schoolhouse and Kent attended an all-girls high school, she said she had no passion for college back then. She took classes such as English, French, Latin, poetry and algebra – all of which she hated.

Kent has lived all around the United States, including New York, Houston, Dallas, Albuquerque, and her home of 52 years, Indianapolis. She married and had four children and later divorced.

Kent said she misses her home in Indianapolis and longs to return, but had to sign her rights to her now-caretaker. Kent is auditing classes, and plans to attend Tarleton again next semester. She enjoys taking classes, because it gets her out of the house and keeps her active.

“I like Tarleton for what it is,” she said. “Stephenville is spread out across the country and you have to drive to get somewhere, but it’s understandable.”

Kent is an example of someone who proves that you’re never too old to do anything, including returning to school.