A new ‘Tonight’ dawns with Jimmy Fallon as host

NEW YORK (AP) — On the walls of Jimmy Fallon’s office are photos. Lots of photos. Of his 2007 marriage to film producer Nancy Juvonen. Of their 6-month-old daughter, Winnie. Of his mom and dad as newlyweds. Fallon points them all out to a visitor proudly.

But the dominant photo is a portrait of Johnny Carson, aglow in front of his “Tonight Show” drapes.

Already Fallon is immersed in this kind of fun. For five years he hosted NBC’s “Late Night,” a job he relinquished only days ago. And now he’s looking ahead to the Big Show, “The Tonight Show,” where Monday, at the special time of 12 midnight EST, he retrieves Carson’s mantle — back in New York after 42 years in Los Angeles. 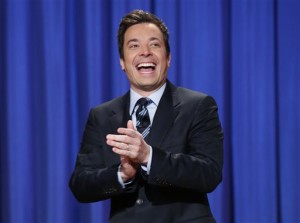 A Manhattan home base perfectly suits its new host, a consummate New Yorker, while bringing it under the same hallowed roof (NBC’s Rockefeller Center headquarters) as “Late Night” and “Saturday Night Live,” other jewels in the crown of Lorne Michaels, its new executive producer.

It also allows “Tonight” to make a clean break from its turbulent post-Carson era under Jay Leno (and, fleetingly, Conan O’Brien), when the Carson-bequeathed formula of jokes, celebs and chitchat was, too often, upstaged by behind-the-scenes soap opera.

Leno was consistently the ratings winner, but never won much respect from the public, critics, or even his own network, which fired him twice and now has lavished his successor with an honor it denied him for his 20-plus years: “The Tonight Show With Jay Leno” is now restored to “The Tonight Show Starring Jimmy Fallon” — the star billing Carson got.

Back in New York, where both “The Tonight Show” and Carson as its host made their start, this 60-year-old TV institution is poised to pick up the legend from where it languished after Carson’s 1992 retirement.

The show will even recommission that sacred space — Studio 6B — where Carson reigned before his 1972 move west.

“I wish Johnny Carson was still around, so he could see what we did with his studio,” says Fallon. “I can’t WAIT to show everybody!”

But even as the 39-year-old waxes eagerness about the new “Tonight Show,” he wants everyone to know it won’t really be so different, after all: essentially an hour-earlier “Late Show With Jimmy Fallon,” including its house band, the Roots (though this eight-piece ensemble will expand by two horns), its announcer-sidekick, Steve Higgins, and comic bits like “Slow Dance the News” and “Thank-you Notes.”

“When we started ‘Late Night,’ we were DOING ‘Late Night,'” Fallon explains, “but over five years it’s kind of grown, and blossomed into what it became, which is ‘The Tonight Show.’ We grew into it!”

Fallon first became popular during his six years on “Saturday Night Live,” where he displayed a chameleonic range of characters and impersonations, plus a musicality that grants him uncanny skill at mimicking numerous recording stars.

His 2004 departure from “SNL” to pursue a film career didn’t pan out, particularly with the comedy flop “Taxi,” in which he co-starred with Queen Latifah (who now has her own talk show, in daytime).

“I learned a lesson from that movie,” he says. “I definitely appreciate everything I get now, where I probably wouldn’t have if that movie was a giant hit. I’m kind of happy that my film career didn’t take off.”

Now a TV staple, Fallon declares that he’s developed “a voice that people expect from us.”

What is that voice?

“Fun. Nice. Absurd,” he says reflectively. A thoughtful pause, then a laugh. “I’m still working on the list.”

“He’s got genuine empathy for his guests and for the audience,” he said. “He’s trying to give them the best of himself.

“He is the most inclusive comic I’ve ever known,” adds Lieb, whose credits include “The Daily Show With Jon Stewart” and the sitcom “NewsRadio.” ”Some comics want to shut the audience out. Jimmy really wants to bring the whole world in on the joke.”

Fallon is also up for anything, and his guests seem chill about following his lead. Like when he and tough-guy action-film star Jason Statham doused each other with pitchers of water during a card game called Water War.

It seems to be paying off. Note that charter “Late Night” host David Letterman held that post for more than a decade before launching “Late Show” (now Fallon’s CBS rival at 11:35 p.m.). O’Brien labored 15 long years before his short-lived promotion to “Tonight.”

Now, after only a five-year internship, Fallon has graduated to what’s repeatedly, momentously, hopefully described as his “last job.”

“That’s what it SHOULD be,” he nods. “It’s a great job, and it should be the last job, if you do it right. I’m looking forward to being here a long time!”

EDITOR’S NOTE — Frazier Moore is a national television columnist for The Associated Press. He can be reached at fmoore@ap.org and at http://www.twitter.com/tvfrazier