A woman’s guide to recruitment

Panhellenic is expecting a huge turn out during fall recruitment with a continuously growing freshmen class and the debut of the new chapter Alpha Omicron Pi, or AOP.

The assistant director of Fraternity and Sorority Life, Taylor Ball-Watson, said, “We definitely have one of the biggest classes of freshmen we have ever had. I’m expecting huge numbers with already 222 women already signed up” as of Aug. 3. 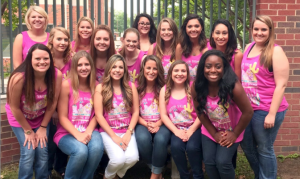 Gallup, a group that conducts frequent public opinion polls, studied 30,000 college graduates who were members of fraternities and sororities. According to their data, “fraternity and sorority members are more likely than all other college graduates to be thriving in each of the five elements of well-being: purpose, social, financial, community and physical.”

Ball-Watson added, “A person involved will be more prepared for life after college.”

A potential new member can gain information by searching Greek life on the Tarleton website. Ball-Watson encourages researching to keep an open mind. She recommended the website sororitysugar.com.

“It’s a blog that goes over everything from recruitment, what to wear, what questions to ask as a potential new member and what to expect in Greek life,” she said. 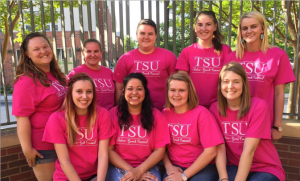 Other considerations are costs and time associated with being in Greek life. Ball-Watson said, “Time and money are the two big things that will hold a person back from joining.”

Ball-Watson said that, during the new member period, members will spend 10 hours a week, but after the period is over, it drops down to about four hours a week.

Also during this period, members pay some one-time fees. So, the first semester costs more than the rest of the membership.

If interested in Geek life, sign up for recruitment by searching “recruitment” on the Tarleton website. The registration fee, which pays for a t-shirt and nightly meals during recruitment week, has increased from $45 to $50.

Pre-recruitment events are a way for potential members and current members to get to know each other in a laid back way. During these events, potential new members can ask questions and get a better feel for the sororities.

Hillari Raemsch, president of Tarleton’s Delta Zeta chapter, said, “A potential new member can best prepare herself for the recruitment process by going to all of the events held, meeting as many Greeks

as possible and making connections with all of them. Having an open mind and positive attitude at each event will provide a potential new member with a lot of beneficial interaction.”

Get to know the chapters face-to-face before the actual recruitment process starts. Ball-Watson mentioned, during transition week, we have an event Tuesday, Aug. 18, 8 p.m. to 10 p.m., in the Student Center, where we are going to have an information session about all Greek life.

The next event, Meet the Greek, will be held on Aug. 25 at Heritage Park from 5 p.m. to 9 p.m. Chapters host a carnival-type event where booths and inflatables are set up. The following week, recruitment starts.

For the pre-recruitment events, Ball-Watson suggested to “dress casual and comfortable. If you feel like you’re going to burn outside, then wear long sleeves. If you’re going to sweat, then wear a tank top. Come as you are. Wear whatever.”

During the official recruitment process, potential new members still want to stand out and have their outfit represent them. Ball-Watson’s biggest thing she tells the women is to “wear shoes that are comfortable. If you are a heel-wearer and you know you can standup in them four hours at a time, great. But if you come [to events] in flats or a shoe that’s more comfortable, no one is going to judge you.”

Terri Garza, president of the Tarleton Delta Phi Epsilon chapter said, “I would say nice jeans and a cute top or a nice sundress would work great for cute casual wear. Business casual is something you would wear to a job interview, so nice slacks or a nice skirt and a blouse. Cocktail dress wear is something you would wear to a fancy place or a nice birthday dinner, so a nice dress. Don’t stress over it too much. Everyone will look great.”

Ball-Watson added, “It really is a job interview. They want to know that you can do the job and are going to work your hardest… balancing social life and school.”

In that four-day process, “expect a lot of girls, loud chants, and great conversations,” said Garza.

Surprisingly, even though recruitment is expected to have more women this year and is going to be fitting in a new chapter into the system, “recruitment won’t be a longer process, but we are planning on being more effective with the timing and how it all works,” said Ball-Watson.

Garza added, “We have a new system we are trying out this fall to make everything run much smoother and quicker.”

Even though there are going to be a lot of potential new members the number of Rho Gammas will not change but Ball-Watson hopes to change that in the future.

When going through the recruitment process day-to-day, Raemsch said, “We encourage people to show their personalities through confidence and individuality. Remember that you are not alone, so try to be relaxed and comfortable. The active members can tend to be nervous as well due to how much they are looking forward to expanding their sisterhood.”

Founders have a lot of responsibility when it comes to planning the basis of a new chapter but can be very rewarding. Ball-Watson said, “Starting a new chapter is hard, because you have to find your footing. You have to figure out where we fit in on campus, who we are, and what are we going to do. But it is also a really cool experience, because you are forever etched in stone as a founder.”

During the recruitment process, the potential new members will have a chance to visit with the new AOP chapter during the first two nights, orientation and sisterhood night. After those two nights, AOP will step aside. For those who absolutely fall in love with AOP and know in their hearts they are meant to be a founder, AOP is going to hold its own formal recruitment two weeks later, Sept. 25 – 27.

Characteristics of a founder should include the ability to “handle themselves academically and someone who is put together, but they are looking for people that exude qualities of an AOP women, which can change campus to campus. They want to make sure you can handle your business, can have a social life, keep up your grades, and not die because you don’t sleep,” said Ball-Watson.

After four long days of chants, tears, and bonding, bid day finally begins. Recruitment might feel like the longest weekend, but once it is bid day, many Greek life women would agree that it is all worth it. “Everyone gets a bid. It might not be your first choice, and [we] can’t promise you’ll get your second,” said Ball-Watson.

When having to make a decision between bids, Bell-Watson said that a potential new member should “make sure what you pick is going to cultivate you.”

Also, when making this decision, Garza said, “Don’t follow someone else’s path. Create one for yourself, and you will be much happier.”

Speaking of recruitment, if you were interested in learning more about the legal recruitment sector. Check out atlanta legal recruiters. I hear they offer an eclectic service.