By Robert Burns and Rahim Faiez—

KABUL, Afghanistan (AP) — An American major general was killed Tuesday in one of the bloodiest insider attacks of the long Afghanistan war when a gunman dressed as an Afghan soldier turned on allied troops, wounding about 15 U.S. and coalition forces, including a German general and two Afghan generals.

The U.S. two-star general was the highest-ranked American officer killed in combat in either of the nation’s post-9/11 wars in Iraq and Afghanistan. His name was not immediately released.

The attack at Marshal Fahim National Defense University underscored the tensions that persist as the U.S. combat role winds down — and it wasn’t the only assault by an Afghan ally on coalition forces on Tuesday. In eastern Paktia province, an Afghan police guard exchanged fire with NATO troops near the governor’s office, provincial police said. The guard was killed in the gunfight.

It wasn’t clear if the two incidents were linked, and police said they were investigating.

The circumstances of the lethal attack at the defense university were murky. The wounded included a German brigadier general and two Afghan generals, officials said. A U.S. official said that of the estimated 15 wounded, about half were Americans, several of them in serious condition.

U.S. officials still asserted confidence in their partnership with the Afghan military, which appears to be holding its own against the Taliban but will soon be operating independently once most U.S.-led coalition forces leave at the end of the year. 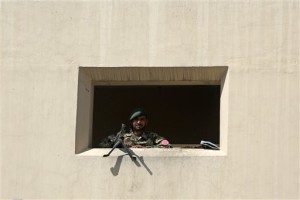 An Afghanistan National Army soldier stands guard at a gate of Camp Qargha, west of Kabul, Afghanistan, Tuesday, Aug. 5, 2014. Earlier in the day, a man dressed in an Afghan army uniform opened fire on foreign troops at the military base, killing a U.S. two-star general and wounding others, among them a German brigadier general and a number of Americans troops, authorities said.
(AP Photo/Massoud Hossaini)

The Iraq and Afghanistan wars have taken more than 6,700 U.S. lives.

Insider attacks rose sharply in 2012, with more than 60 coalition troops — mostly Americans — killed in 40-plus attacks that threatened to shatter all trust between Afghan and allied forces. U.S. commanders imposed a series of precautionary tactics, and the number of such attacks declined sharply last year.

The White House said President Barack Obama was briefed on the shooting. Obama and Defense Secretary Chuck Hagel both spoke with Gen. Joseph Dunford, the top U.S. general in Kabul, who said a joint U.S.-Afghan investigation was underway and who assured his bosses he still had confidence in the Afghan military.

The Pentagon’s press secretary, Navy Rear Adm. John Kirby, announced that the U.S. general officer was killed in the attack but he refused to be specific about his rank, citing concern that his family had not yet been fully and officially notified. Another U.S. official said the officer was a major general. There are only a few U.S. generals in Afghanistan.

Kirby said the general and other officials were on a routine visit to the military university on a base west of Kabul.

Gen. Mohammad Zahir Azimi, a spokesman for Afghanistan’s Defense Ministry, said a “terrorist in an army uniform” opened fire on both local and international troops. Azimi and U.S. officials said the shooter was killed.

Such assaults are sometimes claimed by the Taliban insurgency as proof of their infiltration. Others are attributed to personal disputes or resentment by Afghans who have soured on the continued international presence in their country more than a dozen years after the fall of the Taliban from power.

Mark Jacobson, a former NATO deputy civilian representative to Afghanistan and now a senior adviser at the private Truman National Security Project, said the threat of Afghan troops turning their guns of their American partners is a serious problem.

“Any sort of insider attack, no matter who the victim is, is going to have an impact on the morale of soldiers,” Jacobsen said, adding that when a higher-ranking officer is killed, “you might see a wider impact on morale.”

Foreign aid workers, contractors, journalists and other civilians in Afghanistan are increasingly becoming targets of violence as the U.S.-led military coalition continues a withdrawal to be complete by the end of the year. 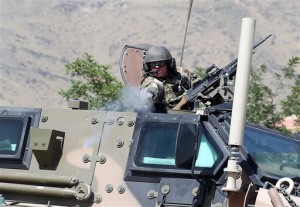 A NATO soldier opens fire in an apparent warning shot in the vicinity of journalists near the main gate of Camp Qargha, west of Kabul, Afghanistan, Tuesday, Aug. 5, 2014. Earlier, a man dressed in an Afghan army uniform opened fire on NATO troops at the military base, killing a U.S. two-star general and wounding some 15 people, among them a German brigadier general and a number of Americans troops, authorities said.
(AP Photo/Massoud Hossaini)

It is “an act by the enemies who don’t want to see Afghanistan have strong institutions,” Karzai said in a statement.

The site of the attack is part of a military compound known as Camp Qargha, sometimes called “Sandhurst in the Sand”— referring to the famed British military academy — because British forces oversaw building the officer school and its training program.

Soldiers were tense in the immediate aftermath of the shooting. One soldier in a NATO convoy leaving Camp Qargha fired an apparent warning shot in the vicinity of Associated Press journalists who were in a car, as well as pedestrians standing nearby. AP photographer Massoud Hossaini said he and an AP colleague were about 15 feet from the soldier at the time. Hossaini said he thought the soldier fired a pistol.

“The vehicle before the last one, someone shouted at me,” Hossaini said. “The last one, the soldier opened fire.”

No one was wounded.