CAIRO (AP) — Al-Qaida’s central leadership broke off ties with one of the most powerful militant groups in Syria, known as the Islamic State of Iraq and the Levant, and distanced itself from the rebel infighting in that country’s civil war, according to a statement Monday.

The announcement appeared to be an attempt by al-Qaida to put its house in order and reassert influence among rival Islamic groups that have turned against one another in Syria, where the groups have joined rebels in fighting to topple President Bashar Assad. 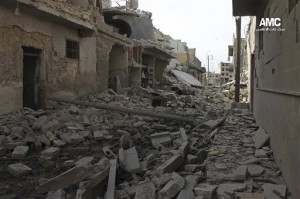 In this Sunday Feb. 2, 2014 citizen journalism image provided by Aleppo Media Center (AMC), an anti-Bashar Assad activist group, which has been authenticated based on its contents and other AP reporting, shows buildings damaged by Syrian government forces airplanes, in Aleppo, Syria. Syrian government helicopters and warplanes unleashed a wave of airstrikes on more than a dozen opposition-held neighborhoods in the northern city of Aleppo on Sunday, firing missiles and dropping crude barrel bombs in a ferocious attack that killed dozens of people, including at least 17 children, activists said.
(AP Photo/Aleppo Media Center, AMC)

In past months, the Islamic State — created by Abu Bakr al-Baghdadi, the head of al-Qaida’s branch in Iraq — has increasingly clashed with other hard-line Islamic factions, including assassinating commanders of rival groups with car bombs and shootings.

Al-Baghdadi created the Islamic State of Iraq and the Levant last year in defiance of orders from the terror network’s leader, Ayman al-Zawahri, who at the time ordered him to remain the head of al-Qaida’s branch in Iraq, while authorizing another group, Jabhat al-Nusra, or Nusra Front, to operate in Syria in al-Qaida’s name. Al-Baghdadi went ahead and created the new group, becoming a powerful force in Syria’s conflict.

In Monday’s statement, al-Qaida’s general command announced it has “no connection” with the Islamic State, underlined that the group “is not a branch of the al-Qaida organization,” and said al-Qaida “is not responsible for its actions.”

Al-Qaida did not condone the group’s creation “and in fact ordered it to stop,” the statement said.

It also condemned the infighting among Islamic groups, saying, “We distance ourselves from the sedition taking place among the mujahedeen factions (in Syria) and of the forbidden blood shed by any faction.” It warned that mujahedeen, of holy warriors, must recognize the “enormity of the catastrophe” caused by “this sedition.”

The authenticity of the statement could not independently be verified but it was posted on websites commonly used by al-Qaida.

The rebel-on-rebel fighting has added another bloody dimension to the Syrian crisis, which erupted in March 2011 as an uprising against President Bashar Assad’s rule but later evolved into an armed insurgency and civil war.

Charles Lister of the Brookings Doha Center said the al-Qaida statement reflected its “attempt to definitively re-assert some level of authority over the jihad in Syria.”

It also showed al-Qaida leadership’s failure to take a genuinely commanding line in the rivalry between the Islamic State and the Nusra Front, and made it inevitable that al-Zawahri had to issue a decisive ruling with permanent consequences, said Lister.