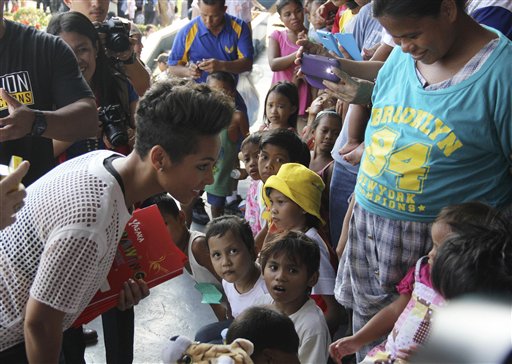 In this photo released by the Philippine Air Force, Grammy-winning singer Alicia Keys, left, smiles at a typhoon survivor as she visits the Villamor Air Base in suburban Pasay, south of Manila, Philippines, Monday Nov. 25, 2013. Keys visited the air force base to bring cheer to hundreds of evacuees from eastern Philippine provinces wracked by Typhoon Haiyan earlier this month.
(AP Photo/Philippine Air Force)

The American singer distributed crayons and coloring books to children at the Villamor Air Base grandstand, where evacuees from eastern Leyte and Samar provinces arrive via C-130 planes.

Social Welfare Department officer Jane Abello says Keys stayed for about half an hour to chat with evacuees.

The R&B star was in Manila for a concert Monday at the seaside MOA Arena.

The Philippine Star earlier quoted her as saying that “music has a way of lifting your spirit and that’s what I hope to do for the Filipino people.”

Keys tweeted three days after the Nov. 8 typhoon: “To the people of the Philippines my heart is with you.”

She also encouraged fans around the world to donate to the typhoon victims.