As Tarleton prepares for this year’s homecoming theme “A Farmer’s Dream, a Texan’s future,” some Tarleton alumni prepare to venture back to recollect on college memories, and cheer on the Texan football team.

Hannah Miller, an agricultural communications major, and recent graduate of Tarleton State University, is journeying back to Stephenville to reminisce on her glory days as a student at Tarleton. 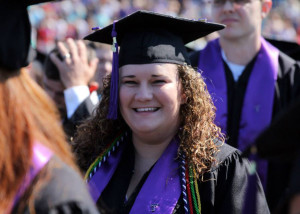 Miller was a transfer student and only spent two years at Tarleton State University. In those two years she managed to dive into student organizations and represented Tarleton with pride.

“Tarleton really allowed me to become the leader I was born to be,” she said. “At the larger university [where] I spent two years before Tarleton, I was just another student.”

“At Tarleton I had so many amazing opportunities to take on leadership portions and experiences to personally better myself.”
Miller was a founding member of Tarleton’s Society of Professional Journalists as well as being involved in several other organizations on campus.

In Miller’s time at Tarleton she received “Greek Woman of the Year” and “Sister of the Year” for her involvement in Sigma Alpha. Miller was also awarded  “Social Media Guru” from the Texas Social Media Research Institute and served as the agriculture senator for Tarleton’s Student Government Association.

Her other campus involvements included Duck Camp leader, officer of her sorority, Sigma Alpha every semester, as well as her membership in the Agricultural Communicators of Tomorrow.

“My last year I was awarded my leadership certification through the program L.E.A.D.S., won the Trogdon Service Award, and my greatest accomplishment at Tarleton, the John Tarleton Spirit Award.”

As an advocate for agriculture, Miller served as a national officer for ACT. Miller thought this year’s homecoming theme “A Farmer’s Dream, a Texan’s Future,” was a perfect fit.

“Dodge has already dubbed this the ‘year of the farmer.’ This is a great time to relate students back to what Tarleton originally was– an agriculture school,” she said.

“We are facing a big problem: there will be 9 billion mouths to feed in around 20 years, and we need to start figuring this problem out. Tarleton students will be instrumental in figuring out this problem. What better way to get our students thinking about how our past can really influence our future?”

Many traditions happen during the week of homecoming. Yell Contest, purple pancakes, beat the drum, the bonfire, and the parade are just a few of the memorable traditions Tarleton students and alumni both cherish.

Miller thought back to the many memories made through preparing for and enjoying homecoming week.

“I think my absolute favorite tradition is float building with my sisters, although Yell Contest night is my favorite night of homecoming,” she said. “Float building is where some of my favorite memories at Tarleton are. Between being freezing or delusional from lack of sleep it’s always a good time.”

“Yell Contest is kind of a cheat because that night is also snake dance and beat the drum, so the combination of all three has to be my favorite night of homecoming,” she said. “Watching all of the silly yells and some of the great yells makes you realize how much pride these organizations have for Tarleton.”

As successful as Miller has been at Texas A&M, she is looking forward to coming back to Tarleton’s homecoming to enjoy the festivities.
“I’m super excited to come back to Tarleton as an alumna. I can’t wait to run into a couple of my favorite professors and mentors who are still in my life today like Dr. Atchley and Dr. Maben, and see the new members of the organizations I was so proud to be a part of.”

Alyssa Winn is a senior agricultural communications student from Fort Worth, Texas. She currently serves as the Executive Producer for Texan TV News.