“American Horror Story: Coven” is shaping up to be, I believe, one of the best seasons of this already popular series. The third season of the show is set in New Orleans during modern day and the 1830s. It follows a group of witches who live and learn at a school for young women.  Sarah Paulson is Cordia Foxx, the headmistress of the school. Her mother is Fiona Goode, the Supreme witch, who is played by Jessica Lange. Zoe Benson, played by Taissa Farmiga, is a young girl forced to go to the school after an accident with her boyfriend that left him dead. Kathy Bates and Angela Bassett both have recurring roles this season to round up this all-star cast.

The opening scene is in present time New Orleans in a swamp. There are two alligator hunters killing an alligator in its trap. After they shot it, they come onshore and run across a woman in their camp. You hear Stevie Nicks’ “Edge of Seventeen” playing.  The blonde witch that was burned in the previous episode is asking them why they kill alligators. They smart off to her and raise their gun. She then awakens the dead alligators and kills both men. Then she walks to the edge of the water and you see bubbles coming from one of the men dragged into it by an alligator.

At the school, Foxx is waking all the girls up for breakfast and the morning gathering. Madison (Emma Roberts) and Zoe are talking about Zoe’s friend (Kyle played by Evan Peters) that died in the previous episode in a bus crash. Madison has zero remorse for what happened to him, but Zoe disagrees with her.

Goode opens her door and Foxx tells her to come downstairs for the gathering so she can hear the ground rules. Delphine LaLaurie (Kathy Bates) is tied up and gagged in her bedroom. Goode had dug her up in the previous episode to see why she is still alive. Goode has an obsession with looking as young as possible. Goode warns her that if she screams she “will put her right back in the ground where she found her.”

The show flashbacks to Detroit in 2012 and Queenie (Gabourey Sidibe) is working at Popeye’s and dealing with a rude customer.  During the confrontation, she sticks her arm into the hot grease and causes the guys hand and arm to burn. She talks in the circle about how there were no witnesses to the incident but that it made the paper, and that is how she came to the school. She also shares that she is a descendent of Tituba, the first witch hanged during the Salem witch trials.

During the meeting, two detectives arrive to question Zoe and Madison about the party and the crash. The detectives tell Zoe that they know she visited the last survivor of the crash before he died. When they tell Zoe that they know he died under the same circumstances as her boyfriend, she breaks down. As Zoe is telling the detectives everything that happened at the party, Goode walks into the room and pours both detectives a glass of water she spit in. She puts them under a spell and orders them to hand over all of their information and never speak of it again. 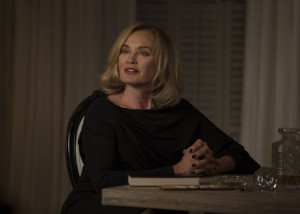 Back in their room, Madison and Zoe are arguing over the confrontation with the detectives. Goode comes in and tells them to close rank when people come in and ask questions. She calls Zoe soft for caring about what other people think, and tells them “even the weakest one of us is better than the best one of them.” Goode warns them that the only thing they have to fear is her. Lange has really played this character well. I really believe that she is one of the only actresses who could play this character as well as she has.

Madison decides to repay Zoe for saving her, and they have gone to the city morgue to resurrect Kyle. When they get to the bodies, they are all cut up into pieces. Madison decides to take different body parts and attach them to Kyles head by using one of Goodes resurrection spells and create the perfect boy.

The scene changes to Foxx and her husband, Hank, at the doctor to see if they are ready to have a baby. The doctor says in vitro fertilization is the best way for them to conceive. Hank argues with her in private to use magic to have a baby.

When Goode goes back to LaLaurie she tells LaLaurie that she has been around for 180 years. LaLaurie blames Marie Laveau (Angela Bassett) for tricking her with what she thought was a love potion. After being given the potion, LaLaurie awoke to all of her slaves outside of the house with LaLaurie’s husband and children hanging from the gutter of the house. The potion LaLaurie was given was for eternal life, she was then out into a box and buried in an unmarked grave.

Zoe and Madison are putting body parts together for the spell. When Kyle does not awaken, Madison leaves Zoe inside with the body. A morgue employee discovers Zoe and Kyle awakens and kills him. We then see the blonde witch from the opening scene walking toward the morgue.

Goode is getting her hair done at a local hair salon, when Laveau comes in and dismisses everyone. Back at the school, Nan (Jamie Brewer) is hearing voices that are giving her a headache, so Queenie asks if Nan is okay Nan ignores her and goes into Goode’s room and unties LaLaurie. Nan tells LaLaurie she thinks too loud and tells her to leave.

Laveau and Goode talk while Laveau finishes her hair and instantly know who the other is. The lines are instantly drawn between the two – Laveau believes herself to be better than all the witches since she is from a pure tribe and a descendant of Tituba, and Goode wants to get the potion for immortality.

Foxx is back in her lab trying to create a spell to get pregnant. She digs up an egg in her garden and she and her husband do a black spell in their bedroom. Let’s just say they make a baby and a snake is involved. It was very provocative. The special effects in this scene were done very well.

Zoe and Kyle leave the morgue and drive back to the school. Zoe is feeling the need to tell Kyle how he died, but Kyle becomes very violent and Zoe almost crashes the car.

The blonde witch pops out from the back seat of the car and tells Zoe where to go. They end up in a cabin and the blonde witch helps Kyle with his scars from being put back together. The witch and Zoe have a connection and she followed her to the morgue. The witch, that was seen being burned alive in last week’s episode, has the power of resurrection, so she was able to heal herself. She is also a big Stevie Nicks fan, who she says is also a witch.  Zoe decides to leave Kyle with the blonde witch so he can heal.

Laveau is now in her room, with the slave man who was also her lover in the 1830s. It is the same man LaLaurie put a boar head on after she found him with her daughter.

Goode finds LaLaurie on a bench in front of her old house. Goode told LaLaurie she deserved to be buried in the box with all the things she did. LaLaurie says that hell is real, and that she saw it while in the box. LaLaurie wants Goode to kill her, but Goode says not yet and they both walk back to the school. Ironically, Goode saves her from being hit by a police car.

This episode really started to connect the recurring characters to the main characters. You can now start to see how everyone is connected in the witches’ world. I am interested to see if there will be an alliance between Queenie and Laveau since both are descendants of Tituba. I am also interested in seeing what part LaLaurie will play, if any, in this conflict besides a hostage.

Like the other seasons, every episode raises more questions than answers them. I look forward to seeing what the next episode holds and how much more complex the storyline can get from here.