This episode picks up at Halloween night in 1833 at one of LaLaurie’s house parties. You are shown how horrible she really was, even worse than what she did to her slaves. At the party, the taunts and scares one of her daughter’s suitors by showing him her “chamber of horrors”. The items in this chamber were actually real eyes and intestines, which scared the man away. After the incident her daughters plan to kill her. After LaLaurie caught wind of the plan, she took her girls in the middle of the night and locked them up in cages in her attic. She threatened them to keep them in there for a year. Fast forward to present time and LaLaurie is panicked by the sight of her girls. All hell has broken loose at the school.

Fiona and Cordelia are now at the hospital. A doctor tells Fiona that sulfuric acid was thrown on Cordelia and she is now blind. The girls are at the school trying to figure out what to do with the army of zombies on the front lawn, and across town Marie is levitating with her spell. Luke goes outside to help and his friends get killed. Nan runs outside to save him but they are stranded in a car. 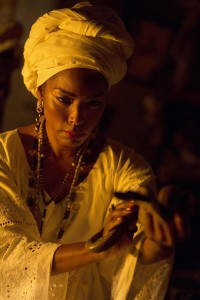 Zoe goes out to save Nan and gets herself stranded in the garden. LaLaurie has a beautiful moment with her eldest child, Borquita. She tried to make amends with her zombie daughter and it backfired on her. I guess she was still pissed about being locked in a cage. After thinking LaLaurie was dead, Borquita attacked Queenie. LaLaurie killed her daughter and saved Queenie. LaLaurie is now showing even more remorse than she was in the beginning of the show. Nan tried to save Luke and fails so Zoe saves the day with a chainsaw. After she goes all Texas Chainsaw Massacre on them, her chainsaw fails and there is still one more zombie. Zoe used a new power to kill the zombie and that power knocked Marie out of the spell. This pretty much confirms that Zoe is the new Supreme.

Hank comes in to see Cordelia and Fiona tells him off. She tells him either he goes on his own or she will make him. She leaves him alone with Cordelia and after he grabs her hand, you see her seeing with her mind what he did with the red haired girl. Its pretty awesome! Fiona, in a drugged stupor, is wandering around the hospital and stumbles across a woman and her stillborn baby. You see the weakness in Fiona as she sees the stillborn baby girl. She places the baby back in the woman’s arms, makes her talk to the baby, and then revives her. This was a beautiful scene that showed how Fiona can use her powers for good, too. I was moved by this scene and no longer see Fiona as just a powerful witch, but as a mother also.

Morning has come and Fiona is watching Nan and Zoe burn the zombie bodies. Fiona thanks Zoe for her help and when LaLaurie comes to show comfort, she says she is only the maid. The council decides to punish Fiona by abdicating her as Supreme and have the council run the coven until the new Supreme shows herself. Fiona turns the tables on Myrtle and tells the council that she is the one who blinded Cordelia. Myrtle was also living in New Orleans under a false identity for the weeks Fiona was back. Fiona convinces the council to have Myrtle burned at the stake. The whole school and council watch her burn and Fiona gets her revenge.

Queenie visits Fiona after the burning. Queenie, the human voodoo doll, helped Fiona get Myrtle burned by sticking her hand in acid to frame Myrtle. When Queenie tells her that she can’t live with what happened, Fiona leads Queenie to think she is the next Supreme. She calms Queenie down and sends her away.

Spalding is in his room having another tea party with Madison’s body. Rigor mortis has set in and he pulls off her arm. That ruined his tea party and was pretty disgusting.

Misty walks up to Myrtle’s burned body and revives her. I really did not see that coming, but that sure makes this show more interesting.

I can’t wait to see what Myrtle does when she is fully revived. I’m also curious about Cordelia and how her powers will be affected with the blindness. I also wonder if Fiona can heal her. I figure if she can make a stillborn come back to life then she can help Cordelia. Let me know what you think!

Misty serves as an Entertainment Reporter for Texan News Service