As Tarleton State University prepares to host the statewide Career Developing Event contest for young FFA members in Texas, it is helping to recruit future agriculture students to the university.

On March 27, the invitational contest kicked off on the Stephenville campus to find the top students in subjects including dairy cattle, floriculture, meat, nursery and landscape, entomology and veterinary science. More than 9,000 students high school students attended.

On April 9, about 4,000 students and ag science educators from more than 300 high schools participated the area CDE contest on campus. And on Thursday, April 24, Tarleton will host the state CDEs, with competitive events for FFA students in dairy cattle, environmental and natural resources, homesite evaluation, land, milk quality and products and range.

Dr. Ted Ford, associate professor of agricultural and consumer sciences, said the competition has changed dramatically over the past 40 years.

“Tarleton began with less than 1,000 contestants and three contests when it first began,” Ford recalled. “This year, there are over 9,000 entries and 17 contests.”

Dr. Don Cawthon, dean of the College of Agricultural and Environmental Sciences, said in a news release that Tarleton has hosted the events since the Texas FFA began sponsoring them.

“I believe in our commitment to agricultural education, to our high school agriculture teachers and to high school students who will become the next generation of leaders in the agricultural, environmental and food industries is second to none,” said Cawthon. 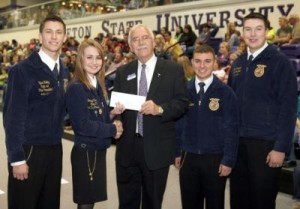 Ford explained that a CDE is a career-developing event for FFA members, who just call it “the contest.” These events provide the youth of the industry with an opportunity to develop leadership skills through judging as well as to prepare for future careers.

Tarleton has established itself as among the best in agricultural education with a turnout four times as large in number as the other schools hosting contests, such as Texas Tech University, Texas A&M University, Stephen F. Austin University and a few junior colleges, Ford said.

He added he has no doubt that Tarleton holds the No. 1 ranking in agriculture events. He receives numerous phone calls from schools in Oklahoma and New Mexico, among others, requesting to be involved in the contest.  He gives the standard reply – the contest is only open to Texas and is full.

After participating in the CDE contest at Tarleton, many students go on to attend the university and about 30 percent pursue a career in agriculture, according to Ford.

Michelle Dukeman, president of Collegiate FFA at Tarleton, said the contests get the word out and encourage more students to extend their FFA involvement into college, as well as giving Texas FFA members an opportunity to meet other members from all over the state.

While the event involves a lot of hard work and studying, Dukeman said it is a lot of fun and well worth it.

Tarleton also hosts a national CDE contest in the fall that invites FFA members from all over the United States to the university.