Every spring the Division of Student Life presents the Leadership and Service Awards in which the graduating Purple Poo dress up for the last time before they reveal themselves.

The Purple Poo is a top secret organization on campus and is something that is taken very seriously at Tarleton. Many members are in for years without anyone ever suspecting them of being apart of the organization. 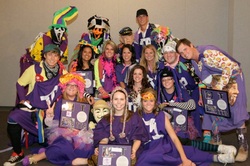 Leadership and Service Awards covers many areas such as the John Tarleton Spirit Awards, Organization of the Year, Program of the Year, and many more. Not only are individuals and organizations being recognized for all of their accomplishments, but also some members of the Purple Poo are masking up for the final time. At the end of the awards the Poo come out in their attire and one by one they unmask and many shock the crowd.

John Gressett, a Poo alumnus, said, “Our names are announced and then we unmask and get a pretty sweet plaque and a TTP or a TTS drop. A lot of times we’ll have our families come too, because for the most part it might be the only time they get to see us dressed up. I got in the spring of 2011 and graduated in May 2012. It was pretty sad because I love Tarleton and didn’t want to be done!”

Sara Rader, a Poo alumna, said, “You go instantly from holding the biggest secret of your college career to exposing yourself and no longer being a Poo… no longer putting on the mask and raising the spirit of Oscar P. Being a Poo was one of the most amazing things that happened to me in my time as a student at Tarleton.”

The Purple Poo is the oldest spirit organization in Texas being formed in 1921 and 1923. The tradition lives on in the hearts of the past, present, and future Texans to come.

This year’s Leadership and Service Awards is April 25, 2014 at 6 p.m. in the Thompson Student Center Ballrooms. The event is available for students and faculty for free, but for guests there is a $5 charge.