Tarleton State University, like many university campuses, faces the issue of aliteracy – the state of people who know how to read, but choose not to.

The lack of interest in reading is becoming more and more common in young people. Bookstores are going out of business, printing companies are struggling and students aren’t embracing the written word as they have historically done. Throughout America’s history, education was a recurring definition of freedom. To be educated meant to be able to read and write. 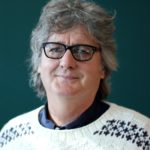 Anderson is an assistant professor of communications. Photo courtesy of tarleton.edu

But now, “nobody reads anymore,” said Dr. Robert Anderson, assistant professor in the Department of Communication Studies. “That kind of thinking, that everyone in your generation doesn’t read… it’s okay not to read. I think it reinforces itself, becomes a self-fulfilling prophecy.”

Anderson spent most of his life working with motion pictures, and has discovered the issue of aliteracy through watching Fahrenheit 451. He advocates the written word, but understands that technology is advanced and compelling.

“I think aliteracy is a problem now, and it will get worse because of the devices,” he said.

He also blames the busy schedules of students.

“Everything takes too long… to read a book takes a while,” he said.

In an informal survey of 40 students on campus in October, Texan News asked students whether or why they had stopped reading. A common response was there was “not enough time.” When asked what external force played the biggest role in aliteracy, Dr. Benjamin Sword, an assistant professor of English and Languages, gave a similar answer.

“Time. I think people who are motivated readers often can just simply not have the time to do it,” Sword said. “Even when you have time… our busy schedules leave us so mentally fatigued that you may have time to read a book, but you just don’t have any gas in the tank to actually pick up that book that you’ve been working through, and really enjoy it.”

To Anderson, books in particular fall under the category of reading, along with newspapers and magazines. However, not everyone sees that as the only options for reading.

But he also believes that, “if they have to take words and put it into thoughts, yes, that is reading.”

Sword added, “I think people read a lot now. They just tend to read things on devices, and they read in a very different way… I think if you’re on social media, you’re reading.” 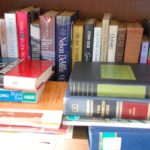 The desire to read books is decreasing among college students. Photo by Rebecca Hernandez

A study by Su Li Chong for an academic journal looked at the role university-required reading played in the lives of potentially aliterate individuals.

This is what Chong found in the study. Unmotivated readers were likely to stop reading more when they had a larger amount of university-required readings.

If there’s not enough time, and there’s not enough motivation, does aliteracy have a chance of taking over Tarleton? What is there to do instead? According to the campus survey, most students don’t even consider reading as an activity to do in their spare time.

“I’m not really choosing to do that other thing rather than reading, because of all those other factors, reading is not something that is going to show up on the list of ‘here’s some ways I could spend this time’,” Sword said. “Also on that list I could put ‘slamming my fingers into doors’ – also something I do not enjoy. I don’t really have to actively choose not to do that, so I would say… those who are aliterate are not actively choosing not to read…”

“There’s countless ways to fill your time,” he added. “If each one of those things takes up x amount of minutes or hours in a day, it doesn’t take very long before that day is full.”

If this is the case, if reading books were to become obsolete, then reading on social media has the potential of defining reading in the future. The altering of this definition could reshape literacy, illiteracy and aliteracy.

Anderson expected this cultural shift, and has been watching it develop on Tarleton’s campus.

“They just have different approaches to life,” he said about students.