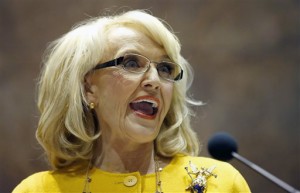 In this Jan. 13, 2014 file photo, Arizona Gov. Jan Brewer speaks during her State of the State address at the Arizona Capitol in Phoenix. The Republican governor faced intensifying pressure Tuesday from CEOs, politicians in Washington and state lawmakers in her own party to veto a bill that would allow business owners with strongly held religious beliefs to deny service to gays and lesbians.
(AP Photo/Ross D. Franklin, File)

PHOENIX (AP) — Arizona Gov. Jan Brewer was holding a series of private meetings Wednesday with opponents and proponents of legislation adding protections for people who assert their religious beliefs in refusing service to gays, a proposal that has focused national attention on the state as business groups, gay rights supporters and even many fellow Republicans urged her to use her veto power.

The governor faces a Saturday deadline to either sign Senate Bill 1062 or use her veto stamp. In a tweet from her official twitter account late Tuesday, the governor said: “I assure you, as always, I will do the right thing for the State of Arizona.”

“We were uncomfortable with it to start with and went along with it thinking it was good for the caucus,” said Sen. Steve Pierce, R-Prescott. “We really didn’t want to vote for it. But we made a mistake, and now we’re trying to do what’s right and correct it.”

Their letter to Brewer, however, said the proposal had fallen victim to inaccuracies. Though their intent, they wrote, “was to create a shield for all citizens’ religious liberties, the bill has been mischaracterized by its opponents as a sword for religious intolerance.”

The bill allows any business, church or person to cite the law as a defense in any action brought by the government or individual claiming discrimination. Supporters call the bill a slight tweak to the state’s existing religious freedom law, which does not extend protections to people based on sexual orientation.

The Senate sponsor, Sen. Steve Yarbrough, R-Chandler, defended the proposal and said his efforts were intended to extend the state’s religious freedom law’s reach to corporations and allow those sued for discrimination to cite the law even when the government isn’t a party. He said a veto would be disappointing.

“I don’t think it’s a good thing for the state in the sense that I believe the First Amendment means what is says about the free exercise of religion. It’s the first freedom in the First Amendment. It’s there for a reason,” Yarbrough said Tuesday. “And I think we need to talk steps to implement that in a meaningful fashion.” 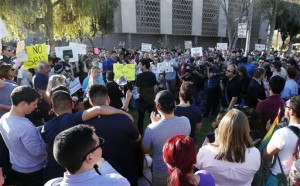 Nearly 250 gay rights supporters protest SB1062 at the Arizona Capitol, Friday, Feb. 21, 2014, in Phoenix. The protesters gathered demanding Gov. Jan Brewer veto legislation that would allow business owners to refuse to serve gays by citing their religious beliefs. The governor must sign or veto Senate Bill 1062 by the end of next week.
(AP Photo/Ross D. Franklin)

The bill was pushed by the Center for Arizona Policy, a social conservative group that opposes abortion and gay marriage. The group says the proposal simply clarifies existing state law and is needed to protect against increasingly activist federal courts.

“What’s happened is our opponents have employed a new political tactic, and it’s working,” said Cathi Herrod, the group’s president. “Throw out the threat of a boycott to attempt to defeat a bill, and you might just be able to be successful.”

Democrats said they warned Republicans who voted for the bill that it was destined for trouble.

“We said this is exactly what is going to happen,” said Sen. Steve Gallardo, D-Phoenix. “You have a bill here that’s so toxic it’s going to divide this Legislature. It’s going to be polarizing the entire state. And that’s exactly what happened.”

With the business community lining up against the proposal, Brewer could be hard-pressed to sign 1062. She has worked hard to return Arizona’s economy to pre-recession levels with business-friendly incentives and tax cuts.

Among the businesses urging a veto are Apple Inc., which is opening a manufacturing plant in Mesa, American Airlines, Marriott and GoDaddy. Arizona U.S. Sens. John McCain and Jeff Flake and former GOP presidential candidate Mitt Romney are also calling for a veto.

Gay rights are also a big topic in the neighboring state of Utah.

Attorneys for three gay and lesbian couples filed their opening brief late Tuesday with a federal appeals court, saying Utah’s same-sex marriage ban has “cemented discrimination” in the state against gays and their children.

The 118-page argument comes in response to the opening brief filed earlier this month by Utah state attorneys who argued the 2004-voter approved ban should stand because the optimal environment for raising children is with a mother and father.