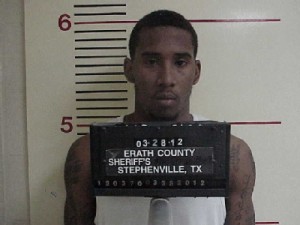 The warrants seek the arrest of Shedrick Haynes, 24, and Zachary Hannibal Nelson, 22, in a burglary of a habitation case,  a second-degree felony.  That burglary at Texan Village apartments was among seven cases reported to campus police between March 7 and March 18 when the campus was on Spring Break.

Janice Horak, assistant vice president of marketing and communications, said that the “university is aware of a legal matter concerning two student athletes.

“Established policies and procedures are in place to address situations involving inappropriate student behavior. Members of the Tarleton student community are held to academic performance and personal behavior standards and questions about alleged misconduct are taken seriously.”

Some of the victims of the burglaries included female Tarleton basketball players, according to police reports obtained by the Texan News Service under the Texas Public Information Act. Some of the spring break burglary victims told student journalists that police told them that the suspects in some cases were basketball players.

One of the burglary victims, Kody Ingram, said that he was told by a Tarleton detective that the suspects were basketball players.

“I heard that two of the basketball players did it,” said Ingram. “We had a detective saying they were found with all the stuff.”

When asked about two of the other burglaries Ingram mentioned that some of the female basketball player’s apartments had been burglarized as well.

Haynes and Nelson became suspects after a Neebo Bookstore employee identified the two men as the persons who sold books taken in one of the burglaries, police records show.

Both athletes gave false names when selling the books, but had used their UIN numbers, allowing the crimes to be connected to their real names, records show.

In another twist, records show that Tarleton Police Sergeant Darren Keith was called on April 3 into Athletic Director Lonn Reisman’s office to pick up items turned into Reisman by one of his athletes. Some of these items — a Fuji camera, 2 SD cards, and a black case — were identified in a police report as being stolen in a burglary.

Bint used this information to obtain the arrest warrants on April 16 for Haynes and Nelson, records show. However, the athletes have yet to be arrested for these crimes, Tarleton Police Chief Justin Williams in an email said earlier this week.

Texan News attempted to contact Haynes and Nelson at phone numbers listed in police reports. Haynes’ phone was answered by a man who said he didn’t know Haynes. Nelson’s number was disconnected.

This isn’t the first time these athletes have dealt with campus police. Haynes was arrested on March 28 for burglary of a habitation on July 30, 2011 when property was taken from a campus dorm, records show. He was released on $10,000 bond the next day.

Records also show that Nelson was arrested on March 19 for possession of marijuana and was released that day on a $500 bond.

Sgt. Keith said police have been searching for the suspects since the warrants were obtained.

“The warrants for Shedrick Haynes and Zachary Nelson are still active,” he said. “The location of these individuals is unknown to local police at this time. If anyone has any information that can lead to the arrest and capture of Shedrick Haynes or Zachary Nelson please call Erath County Crime Stoppers at 254-965-CASH. The information that you provide could be worth up to $1,000 reward. Callers will not be asked their name and will remain anonymous.”