At the beginning of the Student Government Association’s House meeting on Sept. 28, assistant vice president for student life, ShaRhonda Maclin, wanted to take the temperature of the student body after the Black Lives Matter silent protest at Tarleton State University.

This protest sparked a bit of controversy on social media and caught many students by surprise. By the end of the protest, there were many contrasting opinions on the subject of Black Lives Matter and how it took place at Tarleton.

During the SGA meeting, Maclin wanted to speak with the student leaders about their opinions, thoughts and concerns regarding the protest.

“I want to put a confidentiality wall (up) as much as possible,” Maclin said. “You all need to feel like you’re in a safe space.”

Maclin had three questions for the student body and students answered voluntarily. 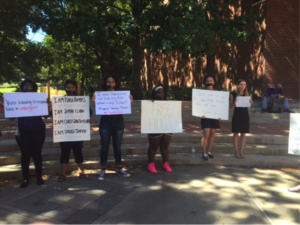 Maclin first asked, “Before the event, describe to me what you knew about the Black Lives Matter movement?”

Tarleton professional educators representative said, “From what I understood, it was peaceful protesting and them some people decided to go the violent route and that’s what sparked all the issues that are arising with what is going on now.”

Phi Mu representative Ashley Ford said, “Pretty much my perspective was that people were angry that black people were being singled out by police, targeting them, maybe taking advantage of them while they’re being arrested, and that people just wanted to have a voice for those people.”

Other students that responded said the movement was about how people of color wanted to fight for their say in equality and stop injustices that are going on. Some students also said they relate the movement with violence due to the generated controversy and rage on both sides of the movement, causing more of a divide in our country.

“For vulnerability sake, my understanding as a person of color who identifies as black, the movement really didn’t hit home for me…until my brother posted a note on Facebook that basically said ‘if I die, then please know that this is who I am,’” Maclin said.

Maclin’s then asked, “When you first received the email, or heard that we were going to have a black lives movement silent protest on campus, what was your thoughts?”

The Delta Chi representative said, “A lot of us didn’t really understand the problems that Black Lives Matter represent and the connection between Stephenville. A lot of us felt like it doesn’t happen here so we were taken back by it.”

Many students spoke up and said that they think it was great that the university is supporting students that want to express themselves and protest. Students also said that it was refreshing to see such a peaceful protest going on aside from what has been in the media lately.

Maclin asked for those in the room to raise their hands if they felt fear and concern for safety on campus. About two-thirds of the room raised its hands. Maclin disclosed to SGA that the university took precautionary steps before the protest took place and that there were also police officers in civilian clothes at the protest along with uniformed officers as well.

Maclin’s final question on the subject was “What is the very worst thing that you perceived could happen personally to you because of this event?”

Some expressed their concern over violence breaking out over opposing views and how a difference of opinions could affect individual relationships with students that are of color.

“The Black Lives Matter campaign could affect my friendships and relationships with the people that I care about who’ve had it different than I have,” a House representative said.

Maclin said that there will be more conversations like this to come. “What we need to do together, is come together,” Maclin said.