At least 10 killed when prison bus strikes train in Texas 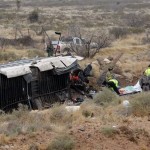 PENWELL, Texas (AP) — At least 10 people were killed Wednesday when a bus carrying state prisoners skidded off an icy highway overpass in West Texas, slid down an embankment and collided with a passing train, a county sheriff said.

The overpass on Interstate 20 was slick with ice Wednesday morning when the Texas Department of Criminal Justice bus left the roadway just west of Odessa, according to Ector County Sheriff Mark Donaldson.

The Texas Department of Criminal Justice said in a statement that eight prisoners and two corrections officers were killed.

Donaldson said five injured people were taken to a hospital. A spokeswoman for Medical Center Hospital in Odessa did not have information on the severity of those injuries.

Justice department spokesman Jason Clark said the bus was carrying 12 prisoners and three corrections officers from the Middleton prison in Abilene to the Sanchez prison in El Paso.

The white bus came to rest on its side, crumpled with heavy damage to its top and undercarriage.

“It’s with a heavy heart that we mourn the loss of those killed and injured this morning in a tragic accident,” said Brad Livingston, executive director of the Texas Department of Criminal Justice. “Their loved ones will be in our thoughts and prayers.”

The Union Pacific train was carrying freight and came to a stop shortly after being struck about 7:30 a.m. Two employees on the train were not injured.

State Rep. Tan Parker notified the Texas House of the accident and led a moment of silence.