A gunshot was heard throughout the Columns Apartments last night as a man in The Pub parking lot attempted to take his own life.

The Pub is located in the center of the Columns Apartment complex on Lillian Street just off the Tarleton campus. 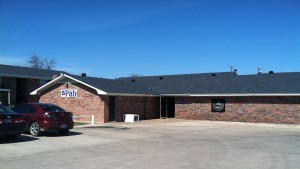 According to a public police report, officers were dispatched to the scene at 10:56 p.m. and did not leave until 1:30 a.m.

Four police vehicles, one ambulance and a fire truck surrounded The Pub as the scene was investigated. There were no names mentioned in the report.

Lisa Lowe, manager of The Pub, said she was not present when the event occurred, but was called soon after the gunshot was heard. “I want to get it out there that it was not a shooting; it was an attempted suicide,”Lowe said when asked about the event.

“It didn’t happen inside the bar. It happened in the parking lot. The man was in the back of his truck,” she said. When asked what other details she knew, she said, “The man was alive when they wheeled out of here. He was [flown] to a hospital after that.” Lowe said she did not know anything about his condition today.

Columns resident Michael Padgett said, “my first thought when the sound happened was that someone was throwing something heavy away in the dumpster, but then I saw the police lights.”

Padgett has lived in the complex for only six months, and said nothing as alarming as a gunshot has happened since he moved in last September.

Current reports are still in progress and are not yet available to the public. Police are still investigating the incident and have not released the name of the man who shot himself.