Authorities search for boy dragged into water by gator

LAKE BUENA VISTA, Fla. (AP) — Wildlife officials pulled four alligators from a lagoon at Walt Disney World after a 2-year-old boy was dragged into the water by an alligator near the upscale Grand Floridian Resort & Spa as his father frantically tried to rescue his son.

Meanwhile, Disney closed beaches Wednesday at their resorts “in an abundance of caution,” divers remained on standby and stunned summer visitors to the Magic Kingdwom waited to hear news of efforts to find the child.

The family of five from Nebraska was on vacation and wading in the Seven Seas Lagoon about 9:20 p.m. Tuesday when the child was taken from an area where “no swimming” were posted by an alligator estimated to be between 4 feet and 7 feet long, Orange County Sheriff Jerry Demings told a news conference early Wednesday. 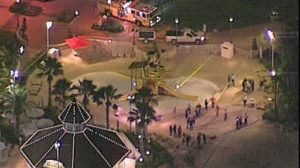 This image taken from video provided by courtesy of WKMG shows an area near where an alligator dragged a 2-year-old boy into the water near Disney’s upscale Grand Floridian Resort & Spa in Orlando, Fla., Tuesday, June 14, 2016. Speaking at a news conference early Wednesday, Orange County Sheriff Jerry Demings says the family of five from Nebraska was on vacation and wading in a lake Tuesday evening when the attack happened. Courtesy WKMG via AP) MANDATORY CREDIT; ORLANDO MARKET OUT; TV OUT.

The grim news is the latest for a city hammered with tragedy in the past few days. On Sunday, a gunman opened fire at a gay nightclub in Orlando, leaving 49 people dead in the worst mass shooting in modern U.S. history. On Friday night, Christina Grimmie, 22, a contestant on season six of “The Voice,” was killed as she signed autographs after a show in Orlando.

The search for the child was still considered a “search and rescue operation,” said Jeff Williamson, a spokesman for the Orange County Sheriff’s Department.

“We are very hopeful,” he said at a morning news conference. “Sometimes you get the worst, but we are hoping for the best.”

Nick Wiley with the Florida Fish and Wildlife Conservation Commission said the four alligators were taken from the water overnight, but officials found no immediate indication they were involved in the child’s disappearance. He said the alligators will be cut open and their remains examined after they are euthanized.

The beach area is part of the luxury Grand Floridian resort, across the lake from Disney’s Magic Kingdom theme park. The man-made lake stretches about 200 acres and reaches a depth of 14 feet. Called the Seven Seas Lagoon, the lake feeds into a series of canals that wind through the entire Disney property.

More than 50 law enforcement personnel searched the well-tended lagoon along with an alligator tracker and two marine units. Williamson said more personnel were being brought in Wednesday to offer some “fresh eyes” for the search.

More than a million alligators live throughout Florida, though the species remains listed as an endangered species because it closely resembles the endangered American crocodile.

Though Florida has grown to the third-most populous state, fatal alligator attacks remain rare. There have been 23 fatalities caused by wild alligators in Florida since 1973, according to data compiled by the Florida Fish and Wildlife Conservation Commission. Those fatalities were among 383 unprovoked bites not caused by someone handling or intentionally harassing an alligator. If you or anyone you know has been involved in an alligator attack or an attack by another animal and has been severely injured, you may be able to make a claim. It is important that you get in touch with the best personal injury lawyer in your area as soon as possible.

Eight children, ages 2 to 16, are among the fatalities. Five died while swimming in lakes, rivers and canals. The youngest victims were killed near lakes, including a 2-year-old girl who wandered 700 feet from her fenced backyard and a 3-year-old boy who left a roped-off swimming area in a county park to pick lily pads.

Williamson, the sheriff’s spokesman, said the boy was at the edge of the water, probably about a foot or two into the water, when the alligator attacked. The water was dark Tuesday night as searchers looked for the boy, he said.

Disney spokeswoman Jacquee Wahaler said everyone at the resort was devastated by what happened and Disney is helping the family.

Minnesota residents John and Kim Aho, visiting Disney with their 12-year-old son Johnny, were stunned to hear what had happened to the child, whose name has not been released.

“We have been to Yellowstone and encountered grizzly bears, but this is just freaky,” John Aho said.

Kim Aho said their son is leery of the water around the park.

“He’s a little freaked out about the gator,” she said.

The sheriff said there had been no other recent reports of similar alligator attacks on the lake.

The wildlife commission said eight of the 15 adults killed by alligators had been swimming in freshwater bodies of water, including a 36-year-old man swimming across a pond while trying to elude police. One 54-year-old woman was seized by an alligator while landscaping near a pond, and an 82-year-old man was killed while walking his dog on a path between two wetland areas.

Alligators are opportunistic feeders that will eat what is readily available and easily overpowered. It’s illegal to feed wild alligators because that causes them to lose their fear of humans. According to wildlife commission biologists, alligators seldom bite people for reasons other than food.

Wildlife commission statistics show Florida averages about seven serious unprovoked bites a year, and the frequency of these bites is rising. However, the likelihood of someone being seriously injured by an unprovoked alligator in Florida is roughly one in 2.4 million.