Battle on a broomstick

The muggle world in which Tarleton State University resides is mostly void of magic. That was until Tarleton senior and Public Relations and Event Management major Bertie Gardner founded The Tarleton QuidKids, a student group dedicated to bringing a common love of the Harry Potter inspired sport, Quidditch, to Stephenville.

The organization regularly comes together to do battle on a broomstick, and more importantly, raise funds for charities through bake sales and t-shirt sales, among other means.

“It’s perfect for someone just wanting to dip their toes into a sport before making a full commitment,” Gardner said. “We’ve also added another social/service component to our club in the last year. We are a chapter of the Harry Potter Alliance, a global non-profit charity that focuses on using pop culture as a basis for supporting social causes. This year, we hope to do more service projects.”

Founded in 2011, the Tarleton Quidditch Association expanded from its humble beginnings of a small club sport into an iconic Tarleton student organization.  Today, the Tarleton QuidKids continues to gain notoriety around campus.

“When Tarleton Quidditch first started in 2011, I had about 30 people show up to the interest meeting,” Gardner said. “Each semester, we usually come out with a core group of at least 10 who love to play and hang out with each other.  I’m feeling pretty optimistic about this semester.  We had at least 14 players at our first event and other people who showed interest.”

Quidditch was a sport made popular through the Harry Potter series of books and movies.  It is a uniquely co-ed contact sport that revolves around 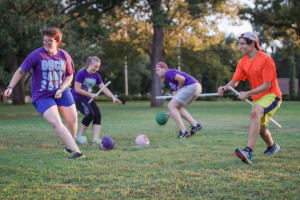 scoring points by throwing a Quaffle, a slightly deflated volleyball, into one of three hoops belonging to the opposing team.  Each team possesses one Keeper who acts as a goaltender of sorts to prevent opposing players from scoring, three Chasers who are responsible for offensive movement of the Quaffle and scoring and two Beaters who can tackle and utilize Bludgers, slightly deflated dodgeballs, to take out enemy Chasers.  In addition, each team has one player designated as a Seeker, whose only objective is to catch a tennis ball inside a sock attached to a snitch runner, which scores a great deal of points for whichever team catches it.  To up the ante, all of this is done while “riding” broomsticks.

“Quidditch is a mixture of sports like dodgeball, tag and rugby; at least two of these games have been drilled into us since elementary school,” Gardner said.  “I want to stress the fact that you don’t need to be a former athlete to play Quidditch.  Yes, we’ll be running and tackling during practice, but that shouldn’t stop you from trying out.  We’ll help build you up to where you need to be.”

At the heart of the Tarleton QuidKids are the various types of fundraisers the group organizes to raise money for groups, most prominently baked goods and t-shirt sales.

According to Texan OrgSync, Tarleton’s database of student organizations, the Tarleton QuidKids held four fundraising efforts during the 2015 spring semester that benefited Reach Out and Read, a program that provides quality children’s books in waiting rooms as well as the Rape Incest Abuse National Network (RAINN), an organization committed to helping prevent sexual violence and assist victims.

“Being able to serve the community by using lessons I learned in Harry Potter, Doctor Who and other types of stories is one of the reasons I decided to help Tarleton Quidditch become a chapter of the Harry Potter Alliance,” Gardner said. “It feels really fulfilling to be able to start a conversation with someone about the Hunger Games and slide them into a conversation about child soldiers and poverty.  To see that click in their brains as something that is happening in the real world and not just fiction really helps to cement the need for these conversations.”

Stemming from a fictional world, Quidditch offers an unconventional opportunity to Tarleton students looking to be a part of an on-the-rise student organization that is not available everywhere.

For junior pre-law major Clayton Schroeder, the Tarleton QuidKids is a reflection of the diversity at Tarleton.

“I think that part of what makes a college community great is the diversity of people of different backgrounds and student organizations that reflect that,” Schroeder said.  “The Tarleton QuidKids are a group that I think add a unique significance to campus.”