Behind the scenes of ‘On 27th Street’

Stephen Wilson, manager of User Support Services, is the artist behind the gallery “On 27th Street: The Art of Stephen Wilson.” He says his inspiration to be an artist came from the works of his mom. Throughout his childhood home, paintings were everywhere, finished or unfinished.

“I thought that was normal as a kid,” Wilson said. He figured that it was in his genes from him to be an artist. 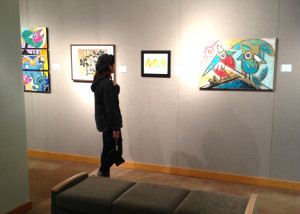 Tarleton student, Stefanie Musick, looking at one of the many paintings in the gallery.
(Drew Isom, Texan News Service)

With a degree in history, he is a self-taught artist. He says he likes to go to workshops during the summer, such as the ones available at Texas Christian University and Texas Museum of Art. “I go to Half Price Books and go nuts,” he said.

Finding time to be an artist while being a manager, taking care of a family, and being involved in a choir is difficult, Wilson says. But being a manager at the Help Desk at Tarleton has taught him time-management skills. For example, to make the best use of his time, he replaces watching television with drawing. “We really all have more time than we confess,” he says.

After being technical at work, he warms up the creative side of his brain by doodling. He says he likes to go by the philosophy of Chuck Jones, the creator of the Looney Tunes — you have to get the bad drawings out of the way.

Throughout 2011, Wilson challenged himself to draw something every day and post the drawing on Facebook. Every drawing contained a bird, his theme for the entire year. Most of the paintings in the gallery are from that year.

Why birds? He says, “Where can a bird not be?” To Wilson, birds represent freedom, peace and love. A few of the paintings in the gallery contain robots to show his technological side and his love for vintage toys. He says his next goal is to have a gallery in Fort Worth.

Greg Ball, director of Tarleton Jazz Ensemble, pushed to run the exhibit for the Tarleton Jazz Festival. Ball gives Wilson complete freedom when he makes posters for the performances, and has loved all 13 of the jazz posters Wilson has created.

Wilson says the reason there is no charge for the exhibit is because he loves Tarleton and jazz.

Stefanie Musick, a senior in biomedical science, was on her way to lunch one day when the paintings in the Fine Arts building caught her attention. A piano player, Musick says she is drawn to others’ styles of art and that she liked how the “artist mostly used robots and birds. “I liked his inspirations of both,” she said. “It’s a bit different from the style of the work that is usually displayed.”

Drew Isom is a Public Relations and Event Management major from Granbury.