Bender and Ferguson no longer a housing option next fall

“Unfortunately, they are not meeting the needs of our modern-day student from an infrastructure standpoint,” said Ben Kunze, director of facilities and events. Renovation of these buildings to meet those needs would come with a very high price tag which would raise the cost of living in those facilities.”

Bender, the all-male facility built in 1953, and Ferguson, the all-female dorm built in 1958, typically provided housing for freshman students with two residents per room and community bathrooms.  That changed in 2016 when the university made the decision to have both Bender and Ferguson house returning students in single bedrooms.

In September 2017, the university relocated 80 students from Bender into other available spaces on campus as a preventative measure after mold was found in the facility’s air vents. 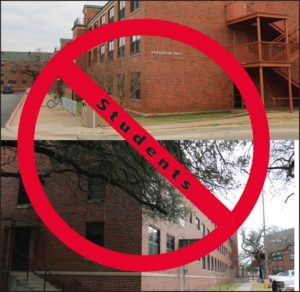 Despite cases of mold and having been two of the most frequent locations for sexual assault occurrences on campus, Bender and Ferguson halls have provided Tarleton students with affordable housing for over 50 years. Photos by Latricia Powell

Although these resident halls have been used to house students for many school years including during the summers, this spring will be the final semester they will house students.

Kunze said the change would start this upcoming fall.

“As to whether they were to be torn down or not, I was not aware of any official plans in the near future for them to be going away. But I do know that in the 2020 Master Planning documents, they were no longer present,” he said.

Bender and Ferguson provided the most affordable housing option for returning students with costs just over $2,500 per semester. Without these facilities next semester, affordable options may become more limited.

“Right now we are planning to offer additional spaces in Centennial Hall that were earmarked for first-year students in the past,” Kunze said. “We will be doing our best to monitor our numbers and our needs and see if we can provide additional spaces within Centennial; this will depend on the size of our new fall 2018 freshmen class.”

Students needing information about assignments or reassignments can contact the office of Facilities and Special Events at 254-968-9083 or by email at Housing@Tarleton.edu.