WASHINGTON (AP) — A special House panel on Benghazi made its public debut in a surprisingly subdued and bipartisan atmosphere Wednesday after two years of pitched political battles between Republicans and Democrats over the Sept. 11, 2012, attack on a U.S. diplomatic post in eastern Libya.

Rep. Trey Gowdy of South Carolina, the Republican chairman, vowed to pursue the facts wherever they lead him. Opening the panel’s first public hearing since its establishment four months ago, he said the U.S. must learn from past violence on U.S. facilities from Beirut to East Africa to Benghazi to prevent repeat attacks.

Gowdy credited a Democrat on the 12-member panel, Rep. Adam Schiff of California, with recommending the subject — embassy security — for the gathering. The committee’s top Democrat, Rep. Elijah Cummings of Maryland, echoed the importance of improving the protection of American facilities and the State Department’s diplomatic security chief was the first witness to testify.

The U.S. ambassador to Libya and three other Americans were killed when militants stormed the Benghazi diplomatic post and, hours later, fired on a CIA compound nearby. The incident became immediate political fodder given its timing in the weeks before a presidential election.

Some Republicans argue the military held back assets that could have saved lives and that President Barack Obama and former Secretary of State Hillary Rodham Clinton lied to the public about the nature of the attack. Democrats deride the interest in Benghazi as a right-wing effort to keep talk of scandal fresh and harm a potential Clinton bid for the presidency in 2016. Seven congressional investigations have yet to fully settle the matter. 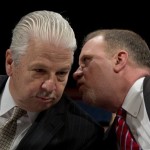 Assistant secretary for diplomatic security at the State Department, Greg Starr, left, and former assistant secretary for infrastructure protection at the Homeland Security Department, Todd Keil, talk before testifying on Capitol Hill in Washington, Wednesday, Sept. 17, 2014, during a House Select Committee on Benghazi hearing on the implementation of the Accountability Review Board recommendations. (AP Photo/Carolyn Kaster)

When House Speaker John Boehner, R-Ohio, called for the establishment of the House Select Committee on Benghazi in May, he accused the Obama administration of “obstructing the truth about Benghazi.” The new body, Boehner vowed, will work “quickly” to get answers.

But Wednesday’s hearing began in low-key fashion, with many empty seats in the Capitol auditorium where it was held.

Gowdy, a former federal prosecutor, attempted to rebut arguments that lawmakers should move on from the attacks. He said the committee was reviewing new Obama administration documents, interviewing new witnesses and asking new questions of individuals who’ve testified in previous congressional investigations.

“Given the gravity of the issues at hand, I am willing to risk answering the same question twice rather than risk not answering it once,” he said.

Cummings, who previously clashed with Republican Rep. Darrell Issa of California as part of a lengthy House Oversight Committee probe of Benghazi, pressed Republicans to acknowledge past reports. He didn’t get into details, but Democrats point to testimony they say disproves notions of a military “stand down” order during the attack of Clinton playing any direct in security decisions. Some Republicans agree on these points.

The department also released a summary of its efforts to implement the recommendations of an independent review board formed shortly after the attack, saying nearly all of the department’s work was complete. These include better identification of high-risk posts and greater coordination on decisions concerning security levels.

However, another witness, Todd Keil, a member of an expert panel on best security practices, lambasted the department for failing to change its practices.

The special investigation’s initial budget is $3.3 million. No limits have been placed on what it can examine or when it should finish.