By Steve Peoples and Ken Thomas—

WASHINGTON (AP) — Republicans called it a win for religious freedom. The decision of the Supreme Court, they said, is further evidence the country’s new health care law is deeply flawed.

The claims of victory arrived almost immediately after the high court ruled Monday that some companies need not provide contraception to women as required by President Barack Obama’s signature domestic policy achievement. Yet there’s a risk for the GOP in crowing too loudly.

“The thought of your boss telling you what kind of birth control you can and can’t get is offensive and it certainly is motivating to women to vote,” said Cecile Richards, president of Planned Parenthood Action Fund, which plans to spend several million dollars this year to campaign for Senate candidates.

The Supreme Court ruled 5-4 that some companies can hold religious objections allowing them to opt out of health law’s birth control coverage requirement. While the ruling does not address the heart of the Affordable Care Act, it’s a setback for Democrats and amplifies a longstanding argument from conservatives that the law they call “Obamacare” intrudes on religious liberties as part of a larger government overreach. 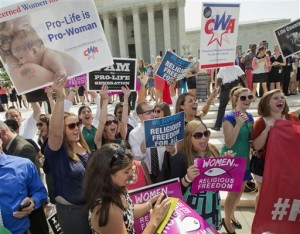 Demonstrator react to hearing the Supreme Court’s decision on the Hobby Lobby case outside the Supreme Court in Washington, Monday, June 30, 2014. The Supreme Court says corporations can hold religious objections that allow them to opt out of the new health law requirement that they cover contraceptives for women.
(AP Photo/Pablo Martinez Monsivais)

“This is a clear and decisive defeat against Obamacare and a victory for the rights of all Americans,” Republican National Committee Chairman Reince Priebus said in a fundraising appeal distributed less than three hours after the Supreme Court ruling.

But Republican leaders such as Priebus were careful to avoid mentioning the impact on women and their reproductive rights, underscoring the delicate balance the GOP must strike as it works to improve its image among women. The party is still recovering from a series of insensitive comments made by GOP candidates in the 2012 election, including Missouri U.S. Senate candidate Todd Akin, whose campaign crumbled after he said women’s bodies were able to avoid pregnancy in cases of “legitimate rape.”

“Republicans have to be careful about not appearing as though they’re anti-contraception. This is a constitutional issue,” said Katie Packer Gage, a GOP strategist whose firm advises Republicans on navigating women’s issues. “We have to be very, very cautious as a party.”

Reinforcing its decision of Monday, the high court on Tuesday left in place lower court rulings in favor of businesses that object to covering all methods of government-approved contraception.

The justices’ action Tuesday was a strong indication that the earlier decision extending religious rights to closely held corporations applies broadly to the contraceptive coverage requirement in the new health care law, not just the four pregnancy prevention methods and devices that the court considered in its ruling. Tuesday’s orders apply to companies owned by Catholics who oppose all contraception. Their cases were awaiting action pending resolution of the Hobby Lobby case.

Polls suggest that most people — and a larger majority of women — think for-profit companies should be required to cover the cost of birth control. A Gallup survey conducted in May found that 90 percent of Americans, including 88 percent of Republicans, see the use of birth control as morally acceptable.

Democrats said the ruling would shine a spotlight on access to birth control and dovetail with a strategy by the party to mobilize female voters on issues such as raising the minimum wage and supporting pay equity for women.

In Colorado, for example, Democratic Sen. Mark Udall’s first TV ad noted Republican Rep. Cory Gardner’s past sponsorship of a bill to outlaw abortions in cases of rape and incest and support for an effort to grant an embryo the same legal rights as a person, which could have outlawed some types of birth control and all abortions. Gardner now says he opposes the “personhood” measure.

In Iowa, Democrats have signaled plans to highlight Republican Joni Ernst’s support of a personhood amendment to the state’s constitution. In Michigan, Democrats backing Senate candidate Gary Peters have sought to tarnish Republican Terri Lynn Land’s record on reproductive rights, prompting her to air her own ad in April declaring, “As a woman, I might know a little bit more about women than Gary Peters.”

It won’t be clear until November whether women will respond to such appeals.

Fewer young women typically vote in midterm elections compared with presidential years. And they are particularly disengaged from this year’s races: 63 percent of women under age 30 in an AP-GfK poll conducted before the ruling reported they “don’t care very much” which party wins control of Congress. Just 21 percent said they were certain to vote in November.

Writing for the court’s conservative majority, Justice Samuel Alito suggested the White House could resolve the issue by broadening a birth control compromise it created earlier for religion-oriented nonprofits. In those cases a third party — usually an insurer — can cover contraceptives at no charge to the affected employees, and the government absorbs the cost.

But White House spokesman Josh Earnest signaled the administration may not take that route. Instead, he challenged Congress to pass legislation to address the coverage gap for women. That could put some Republicans in a difficult spot politically, but not right away. For now, they’re enjoying what many viewed as a win.

“When Obamacare and its impact on people is front and center in the political debate, it’s just not good news for Democrats,” Republican strategist Kevin Madden said.