Employers with religious or moral qualms will also be able to cover some birth control methods, and not others. Experts said that could interfere with efforts to promote modern long-acting implantable contraceptives, such as IUDs, which are more expensive.

The new policy was a long-anticipated revision to Affordable Care Act requirements that most companies cover birth control as preventive care for women, at no additional cost. That Obama-era requirement applies to all FDA-approved methods, including the morning-after pill, which some religious conservatives call an abortion drug, though scientists say it has no effect on women who are already pregnant.

As a result of the ACA, most women no longer pay for contraceptives. Several advocacy groups immediately announced plans to try to block Trump administration rule. “We are preparing to see the government in court,” said Brigitte Amiri, a senior attorney for the ACLU.

Trump’s religious and moral exemption is expected to galvanize both his opponents and religious conservatives who back him, but it seems unlikely to have a major impact on America’s largely secular workplaces.

“I can’t imagine that many employers are going to be willing to certify that they have a moral objection to standard birth control methods,” said Dan Mendelson, president of the consulting firm Avalere Health.

That said, Mendelson said he worries the new rule will set a precedent for weakening ACA requirements that basic benefits be covered. “If you look at it as a public health issue, it is a step in the wrong direction, and it weakens the protections of the ACA,” he said. 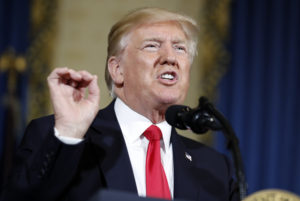 In this July 24, 2017 photo, President Donald Trump speaks about healthcare in the Blue Room of the White House in Washington. Trump is allowing more employers to opt out of providing no-cost birth control to women by claiming religious or moral objections, issuing new rules Friday that take another step in rolling back the Obama health care law. (AP Photo/Alex Brandon)

Tens of thousands of women could be affected by Trump’s policy, but the vast majority of companies have no qualms about offering birth control benefits through their health plans. Human resource managers recognize that employers get an economic benefit from helping women space out their pregnancies, since female workers are central to most enterprises.

The administration estimated that some 200 employers who have already voiced objections to the Obama-era policy would qualify for the expanded opt-out, and that 120,000 women would be affected.

However, it’s unclear how major religious-affiliated employers such as Catholic hospitals and universities will respond. Many Catholic hospitals now rely on an Obama-era workaround under which the government pays for the cost of birth control coverage. That workaround can continue under the new rules.

Since contraception became a covered preventive benefit, the share of women employees paying their own money for birth control pills has plunged to 3 percent, from 21 percent, according to the latest Kaiser Family Foundation figures.

“It was really important for women to have a choice of the full range of contraceptive methods that were FDA-approved,” said Alina Salganicoff, director of women’s health policy for the Kaiser foundation. “This will now make it up to the employer whether or not to cover contraception, and whether to cover all methods.”

Salganicoff said she’s concerned about coverage for implantable devices that are more expensive but also much more effective. “It opens up a lot of opportunities for employers to make choices about the coverage that women have right now,” she said.

“No American should be forced to violate his or her own conscience in order to abide by the laws and regulations governing our health care system,” Health and Human Services spokeswoman Caitlin Oakley said in a statement. “Today’s actions affirm the Trump administration’s commitment to upholding the freedoms afforded all Americans under our Constitution.”

The rule “fulfills one of the Trump administration’s most important campaign promises to restore religious liberty,” said Ashley McGuire of The Catholic Association, an advocacy group.

Administration officials also said the administration is tightening oversight of how plans sold under the health law cover abortion. With limited exceptions, abortions can only be paid for through a separate premium collected from enrollees. No public subsidies can be used, except in cases that involve rape, incest, or preserving the life of the mother.

Doctors’ groups that were instrumental in derailing Republican plans to repeal the health law outright expressed their dismay.

The American Congress of Obstetricians and Gynecologists said the new policy could reverse the recent progress in lowering the nation’s rate of unintended pregnancies.

“Instead of fulfilling its mission ‘to enhance and protect the health and well-being of all Americans,’ HHS leaders under the current administration are focused on turning back the clock on women’s health,” said the organization’s president, Dr. Haywood Brown.