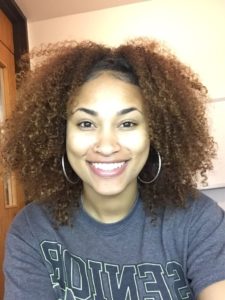 Corrupt police and the killings of unarmed black people have spread terror across our nation and the world leading to a modern day civil rights movement called Black Lives Matter. Now some may accuse these social activists of being terrorists because they disturb the peace in order to achieve national attention. I personally do not agree or condone violence or looting. However, when you cage and mistreat a group of people for ongoing years, chaos is bound to happen.

I, too, was a caged bird once upon a time; therefore, fighting for truth and liberation means everything to me. We know white people are tired of hearing about the 400 years their ancestors enslaved, abused and executed us. But the truth is, this same treatment is still happening all around the world and the only difference from the past is that these incidents are being recorded. Unfortunately, even with video-taped evidence, black lives still do not matter enough for these murderers to be indicted. Black people just want to be treated as an equal in our own pursuits of life, liberty and happiness. Yet we are being gunned down in the streets, in our homes and in a park all alone with a toy gun.

Corrupt police didn’t even blink an eye when Sandra Bland was being yanked from her car over a failure to signal or when Eric Garner repeatedly said that he could not breathe. Police officers are allowed to abuse their power and revoke the rights of innocent civilians every day. Even those guilty of crimes do not deserve to be hunted down and killed as if they were prey.

What changed in a police officers’ job descriptions that gave him or her the permission and the right to do so, to shoot a child in the head while she’s asleep? Are black people not allowed to have a bad day? Are we not allowed to walk freely down the street? Why is our freedom conditional?

We pay these public servants with our tax dollars to protect us and the agenda is to kill us instead. I do not want to have to sit down with my unborn children and tell them that this world doesn’t want us to be great. I fear for everyone when I see those flashing lights. No one should have to worry about their loved ones being pulled over by police and killed for following instructions. I watched an unarmed black therapist lay in the street and tell the officer that he was trying to help an autistic patient. He was still shot in the leg 30 feet away without reason.

Black Lives Matter and the other movements surfacing stand for something truly detrimental to the black race: stop killing us and deescalate the situation. It is not fair that these men in blue get to falsely yell things like “stop resisting” or “let go of my gun,” kill someone while being recorded and then proceed to go home and take off their uniform.

We cannot extract the melanin in our skin even if we wanted to and those who have been killed will never get to go home again, kiss their families or fight and believe in what’s true. As much as the privileged would like to remain comfortable, we cannot deny that racism is very prevalent amongst us today.

These killings have impacted my life in such a significant way that many of my friends I had just a year ago, think I’m too pro-black. Maybe I am too “pro-black” for them but I’d rather stand for something than fall for anything. I’ve learned that you can’t condemn someone because they do not understand. But I think it’s time for all of us, black, white, Hispanic, Native-American and Asian to start the conversation about what we can do to change the future of our children.

Everyone knows America has a dark history but no one wants to talk about it even if it’s what we see when we log into social media or turn on our TVs. Yes, all lives matter but we need to focus on the black lives that have been taken and were not justified. There is no doubt that police brutality must come to an end for the sake of the American people. But it is up to us to make sure that happens.

This isn’t a war on just people of color because white people have been killed as well. The first step in solving the problem is acknowledging that there is one. We have to start with educating each other. We have to seek knowledge of the truth instead the generic truth of our past and present. There is a job for everyone in this revolution.