Texans, the Blue Bell drought in Stephenville has ended.

This fall and winter will now be a whole lot colder with the return of Blue Bell to the shelves today, Nov. 2, as the company begins the second phase of its restocking process. The freezer cases at local grocery stores such as H.E.B. and retailers such as Walmart have the signature gold-rimmed products again.

Some shoppers like Sara Sanderson said they have stopped eating ice cream altogether since Blue Bell was pulled from the shelves in April. Sanderson says she has only purchased another brand of ice cream once since then. 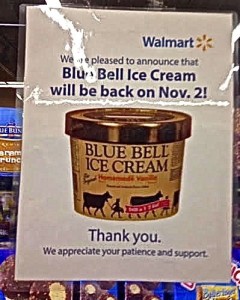 Walmart in Stephenville advertises the return of Blue Bell to its shelves.
(Photo by Shala Watson)

“I am 100 percent behind the return of Blue Bell,” Sanderson said. “I am so excited that it is finally back!”

Blue Bell said its facilities have undergone a thorough cleaning and sterilization process since the listeria outbreak that killed three people this spring. According to a statement released by Blue Bell, “All of the enhancements made in our facilities to procedures and equipment, and a ‘test and hold’ procedure where ice cream is not distributed until the production run is tested, are designed to ensure that the ice cream we distribute is safe for consumers to enjoy.”

“I do trust that all the issues have been fixed,” Sanderson said. “There was so much testing that was done at the facilities, and it was on the news so much that I am sure Blue Bell would have taken every precaution necessary to ensure that the break-out wouldn’t happen again.”

However, not all customers are cheering Blue Bell’s return.

As Patricia Nyame said, “I don’t trust them anymore. It said in the news that they were aware of the bacteria in their machine that makes the ice cream, and they still sent it out to customers. So, that tells me if they do it once, they will do it again. I will never eat Blue Bell again.”

“They got real lazy with testing their product during various stages of manufacturing,” he said. “I’ve heard stories of quality and safety standards lacking. I think Blue Bell had its run. There are too many great products out there with people working hard to ensure a great tasting ice cream that is also safe. I’ve moved on.”

In its public statements, Blue Bell has assured those concerned that the company is “committed to producing safe, high-quality, great-tasting ice cream for you and your family to enjoy and to maintaining high standards for production processes and cleanliness. We have upgraded our procedures and employee training and have adopted the same overall philosophy at all of our facilities.”