Border security back in front of Texas lawmakers 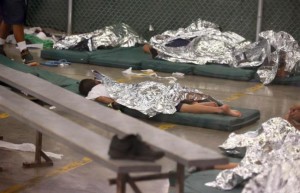 Young boys sleep in a holding cell where hundreds of mostly Central American immigrant children are being processed and held at the U.S. Customs and Border Protection Nogales Placement Center on Wednesday, June 18, 2014, in Nogales, Ariz. CPB provided media tours Wednesday of two locations in Brownsville, Texas, and Nogales, that have been central to processing the more than 47,000 unaccompanied children who have entered the country illegally since Oct. 1.
(AP Photo/Ross D. Franklin, Pool)

AUSTIN, Texas (AP) — Plans to ramp up patrols along the Texas-Mexico border at a potential cost of $1.3 million a week are getting new attention in the Capitol.

Texas Department of Public Safety officials are to testify Tuesday about border operations before the Texas House Committee on Homeland Security and Public Safety. The hearing in Austin comes two weeks after Gov. Rick Perry took the rare step of authorizing additional spending for an “operational surge.”

The committee meets as both Republicans and Democrats say a “humanitarian crisis” unfolds along the border.

More than 52,000 unaccompanied children have been apprehended entering the United States illegally since October.

Perry and other top Republicans say the situation has increased the potential for drug and human trafficking as border agents deal instead with the flood of children.