The Residential Report left current students at Tarleton with unanswered questions and tough decisions about housing for next semester.

On Dec. 21, 2012, Wendy Birmingham sent an email to current Tarleton residents and family members. The email contained a direct link to the Residential Report. In the Residential Report you could learn about new housing options for next year, find out if Tarleton’s residential requirement applies to you, and understand the process of reapplication and self-assignment. 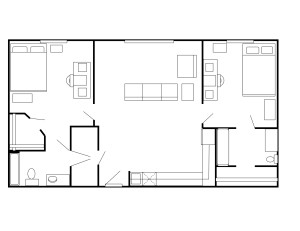 The floor plan for the two bedroom, two bath apartments currently is for one student per bedroom.
(Photo courtesy of Tarleton State University)

Residential Living & Learning has collaborated with Bosque Crossing to convert all the two bedroom, two bathroom apartments so that each bedroom will accommodate two students. Previously this layout accommodated one student per bedroom. Some students had requested a desire for a low cost apartment option. 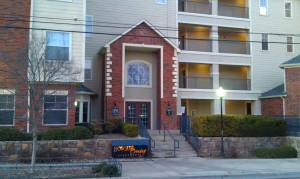 Bosque Crossing as seen from the front of the building.
(Megan Kramer, Texan News Service)

Shelly Conboy-Brown, assistant director of Residential Living & Learning, said, “The first thing that we’re going to do is we’re assigning the 2 bed, 2 bath shared bedrooms prior to the self-assignment process opening. If there are some of those that are available we very well might make a decision to leave some.”

The 154 current residents of the two bedroom, two bathroom apartments at Bosque Crossing did not have the option to stay in their current apartment without any changes being made. Conboy-Brown said, “We sent out a lengthy newsletter and it explains all of the reapplication process, all of the options, all of the building changes, and we did that over the holidays so that families would have an opportunity to discuss it while they were at home over the holidays.”

Conboy-Brown said the changes to the two bedroom, two bathroom apartments at Bosque Crossing will be accepted well by students. Both Leese and Conboy-Brown said they had only heard positive things and excitement regarding the changes. Leese said, “I haven’t heard any negatives about it. No, the only things I’ve heard were there were a couple current sophomores who I know live in Bosque Crossing now and said that they liked having a private bedroom.”

Some students aren’t excited about the changes being made to the two bedroom, two bathroom apartments at Bosque Crossing. Sophomore Angelica DeAnda said, “I don’t think it’s right. I honestly think they should build more buildings.” The bedrooms at Bosque Crossing are smaller than the rooms students share in a dorm. It will be tight with two people sharing one bedroom.

Sophomore Cody Propps said, “I am not excited, that’s why I am moving out.” The two bedroom, two bathroom apartments at Bosque Crossing will be just like the dorms. The only difference being at Bosque Crossing you will have a living room, kitchen, and optional meal plan. These students need their own space as they grow older, so these new changes will not be welcomed by many of them. We’ve heard that a fair few students are moving out of this building. Some of them have already found moving companies in Houston TX that can assist them with moving out of this building. Hopefully, these students will find somewhere else to live. This situation is not ideal at all.

Leese made similar changes to a sophomore-housing apartment complex at a previous university. Leese said, “In that case they still had to have a meal plan, but it’s the rate was so much cheaper and it gave them an apartment setting where they had a living room.”