The Confederate flags that are usually seen every April in the West End Cemetery at the corner of Washington St. and Lillian St. were flying on Friday, but today they can be found in the dumpster behind Newman Hall. The Daughters of the Confederacy place flags on the graves of veterans who fought for the South during the Civil War. 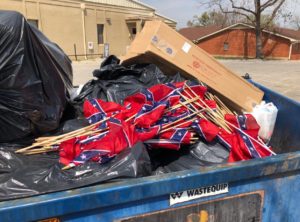 The confederate flags were discovered in the dumpster on Monday morning. Officials for the cemetery and Newman Hall were unaware of their displacement. Photo by Ashley Inge

Texan News saw the flags being put out Friday morning but did not see them when they arrived to campus on Monday. An investigation led to the finding of the flags in the dumpster.

Stephenville Chief of Police Jason King was not aware that the flags were missing and said that no report has been filed at the time of this story.

Fr. Matthew Sanka was also unaware that the flags were in his trash can and said that he was not aware that they were there after a Fish Fry at Newman Hall on Friday.

“I didn’t know about it (the flags) until 30 minutes ago when the police called and told me. He asked if we wanted to open an investigation and to press charges and I said yes,” Sheran Weible, president of the Major George B. Erath 2679 Stephenville Chapter of the United Daughters of the Confederacy said.

Weible said their chapter will be at the West End Cemetery on Friday, March 30 at 10:00 a.m. to replace the flags that were thrown away.