Sir Isaac Newton said, “What goes up must come down,” but according to the flood of emails from the Tarleton Control Center regarding on-campus elevators, that may not always be the case. 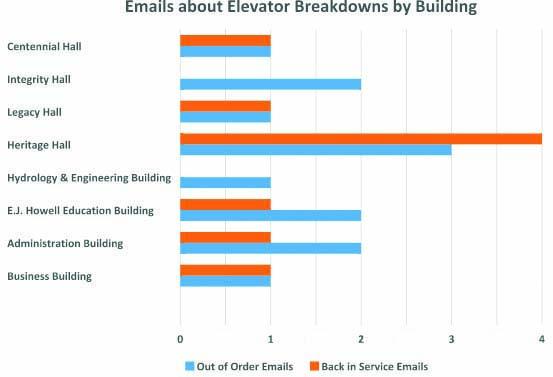 Many are left wondering why the breakdowns are so frequent.

“If you hear screaming, it is probably because someone got stuck on the elevator. It’s frustrating dealing with the constant maintenance on the elevators,” freshman resident of Heritage Hall Kristin Savidge said.

The Administration Building, the E.J. Howell Education Building and Integrity Hall have had two emails each stating an elevator was out-of-order and one stating it was back to working.

Lastly, one email each concerning Legacy Hall, Centennial Hall, the Hydrology and Engineering Building and the Business Building, have been sent stating the elevators were either in service again or temporarily broken down.

“Mr. Aaron Wand (Director for Facility Services) stated the No.1 problem we experience with elevators involves the human element, where someone props or holds a door open too long… Once this happens, the door will fail-safe in the open position until a maintenance technician resets the elevator,” Director of Risk Management and Compliance Kent Styron said.

When this happens, they let the campus community know.

“Whenever there is a problem, it is standard procedure to notify the campus that a problem exists,” Styron said, “Elevators are set with extreme safe sensitivity and reset procedures. Most buildings average two or three resets a year.”

Styron said that most of the new elevators are under warranty for a one or two year period and all are “highly regulated and require state inspections.”