According to the Associated Press, Aaron Alexis, the former Navy reservist who slaughtered 12 people at the Washington Navy Yard had been hearing voices and was being treated for mental health problems in the weeks before his rampage. Officials said Tuesday that despite his treatment for mental health issues, Alexis was not stripped of his security clearance.

Alexis, a 34-year-old information technology employee with a defense contractor, used a valid pass to get into the highly secured installation Monday morning and started firing inside a building, according to the FBI. He was killed in a gun battle with police. 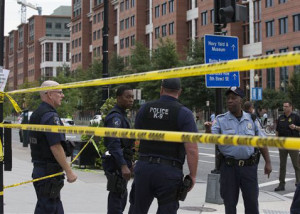 Monday’s shooting was the deadliest on a military installation in the U.S. since the attack at Fort Hood, Texas in 2009. Investigators say the motive for the shooting is still a mystery.

U.S. law enforcement officials told the AP that there was no known connection to international or domestic terrorism and that investigators have found no writings to suggest a political or religious motivation.

Alexis had been suffering from a range of mental problems including paranoia and a sleep disorder, and had been hearing voices in his head. Veterans Affairs had treated him since August for his mental problems, officials said, who spoke on the condition of anonymity because the criminal investigation was still ongoing.

Alexis had not been declared mentally unfit, which would have rescinded a security clearance he had from his previous time in the Navy Reserves.

The Navy said Alexis had been a full-time Navy reservist from 2007 to early 2011. He left the Navy as a petty officer third class. It did not say why he left. He had been an aviation electrician’s mate with a unit in Fort Worth.

At the time of the shooting, Alexis was an employee with The Experts, a company that was a Defense Department subcontractor, rather than active-duty personnel, Washington Police Chief Cathy Lanier said.

The dead at the Navy Yard ranged in age from 46 to 73, according to Mayor Vincent Gray.

Alexis carried three weapons: an AR-15 assault rifle, a shotgun, and a handgun that he took from a police officer at the scene, according to two federal law enforcement officials who spoke on condition of anonymity because they were not authorized to discuss the investigation.

The AR-15 is the same type of rifle used in last year’s mass shooting at a Newtown, Conn., elementary school that killed 20 students and six women. The weapon was also used in the shooting at a Colorado movie theater that killed 12 and wounded 70.

For much of the day Monday, authorities said they were looking for a possible second attacker who may have been disguised in an olive-drab military-style uniform. But late Monday night, they said they were convinced the shooting was the work of a lone gunman, and the lockdown around the area was eased.

“We do now feel comfortable that we have the single and sole person responsible for the loss of life inside the base today,” Lanier said.

The shooting took place at building 197, the headquarters for Naval Sea Systems Command, around 8:20am. Witnesses on Monday described a gunman opening fire from a fourth-floor overlook, aiming down on people on the main floor, which includes a glass-walled cafeteria. Others said a gunman fired at them in a third-floor hallway.

The headquarters buys, builds, and maintains ships and submarines. About 3,000 people work at headquarters, many of them civilians.

The Texan News Service will have more on this story as information becomes available.