Sheriff Tommy Bryant has defeated his fellow opponents Clell Murray and Tish Lecroy in the Republican Primary for the race for sheriff by 66.87 percent of the county’s votes, which totaled to 4,472 votes. His opponent Clell Murray followed behind in the race with 27.92 percent of the votes, equaling 1,867 in his favor. Bryant’s second opponent, Tish Lecroy, ended up with 5.22 percent of the votes, which equaled 349. Bryant’s re-election will lead him into over 20 years of being Erath County Sheriff.

After the election, Bryant said, “Well, I’m blessed and very honored. It’s an amazing feeling that the majority of voters in Erath County want me to be their sheriff for another term, and I look forward to doing it—keep doing the things we are doing and improving every day. Thank you all. And I sure in the world thank my family, because this is the second time I’ve had an opponent—well, I had two this time—and it’s tough on your family.”

Murray, one of Bryant’s two opponents, said after Bryant’s win, “I would like thank all the people who asked me to run that gave me the support to do it. Apparently, Erath County wasn’t ready for a change, but we are proud of the campaign we ran and thought we did a good race. Just wasn’t in the cards.” 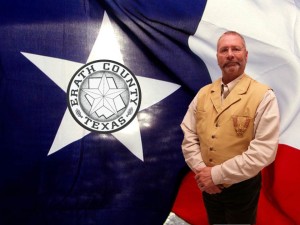 Bryant is a 1987 graduate of the Tarleton State University Police Academy. Once Bryant graduated, he was hired on at the Stephenville Police Department. “While I was working for the police department, I noticed there were some things that I would do differently if I was sheriff. I got to visiting with people and talking to them and they had some of the same ideas that I did,” said Bryant.

January 1, 1997 Bryant won his first election to become Erath County Sheriff. Since becoming sheriff, Bryant implemented many of the ideas he had before becoming sheriff such as how the deputies were handling their duties and what the inmates do in their free-time while in jail. “They’ve painted churches and schools and they keep our cemeteries clean. It saves taxpayers a load of money. Plus, I give the inmates “good-time” so they can get out of here a little quicker, get back to their families and start working again, where they can be somewhat productive. That’s some of the reasons I decided to run for sheriff,” said Bryant.

Bryant has also adopted a stretch of highway where inmates pick up trash, created a “Refrigerator Card” for senior citizens that entails important medical information for Emergency Medical Services if necessary, and has sponsored House Bill 946 protecting children in homes where methamphetamine (meth) is present.