If you’re a gamer, you know that there aren’t many game franchises that are more popular than Call of Duty. A lot of people play hours and hours of the game, hoping to be the best. They spend money on better monitors, the Best Gaming Chair they can find, and custom controllers, trying to get the best gaming experience they possibly can. This is why the anticipation and hype surrounding “Call of Duty: Ghosts,” had many fans anxiously awaiting the game’s release. However, this fan thought that the game fell flat. I played it on the Xbox 360 console. The story seemed to follow the usual path of all of its predecessors’ betrayal, world domination and a cliffhanger.

The story starts out with two brothers, Logan and Hesh. We find them talking to their father about the legend of the ghosts, an elite squad. Multiple cities are destroyed by a weapon orbiting earth’s atmosphere, which leaves a giant crater known as No Man’s Land. The game flashes 10 years ahead where the story really starts to unravel. The story is more centered on a family element this time, which can make you feel closer to the characters.

The story line, however predictable, leaves you feeling something for the family dynamic presented. The sibling protectiveness is there in abundance. While the story overall is mediocre, the ending leaves many questions and definitely hints at a sequel. 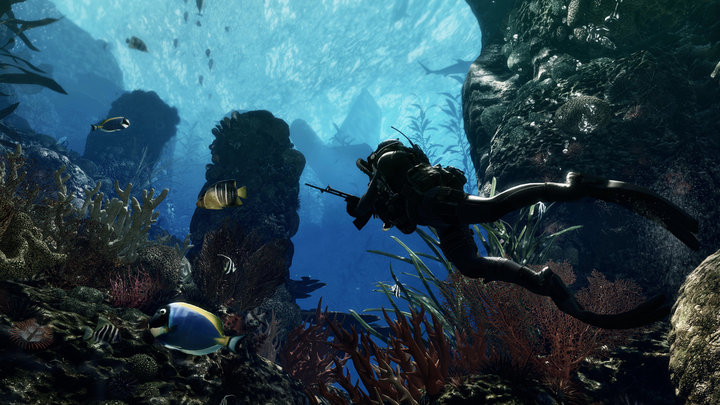 The missions are mostly fun and can be challenging. During the underwater mission, I got killed by sharks quite a few times. Some of the fighting sequences are disorienting, especially when you are rappelling down the side of a building. There is another mission when you shoot a TV to get rid of the light and the flashlight on the edge of your gun turns into a strobe light. These missions made me feel sick and hurt my eyes. While the missions took combat to a different level it was irritating and quite unwelcome. Though, the storyline was fun. Combat was pretty much the same throughout the game. The only difference is you get to fly an attack helicopter.

The best part of the game was having your trusty dog, Riley, a German Shepard, by your side for a few missions. The bond between dog and owner really pulled my heartstrings. What’s better at wartime than a faithful companion?

The battles are all over the world so at least it’s not boring. The most notable site is in space where gravity works against you as you try to dodge bullets. Underwater battles are tricky as well since you need to shoot an enemy a few times for them to go down.

Most people get Call of Duty for the multiplayer experience but this game has something new called squads. Squads have different modes such as: Wargame, Squad assault, Squad V. Squad and Safeguard. In Wargame you can play on your own or with friends against a squad of bots. In Squad assault you can take on another players AI controlled squad. In Squad V. Squad you play against another human player and their squad. In Safeguard you can play cooperatively with a group of up to four people and take on waves of enemies. You start with a basic loadout and get support drops that contain better weapons, kill streaks and perks. I haven’t played much of the squad modes but it seems to resemble combat training from the black ops games.

Multiplayer is still fun with new maps and different weapons but there is nothing much different from any of the other past games. The map interface is slightly different and the stats that normally can be pulled up by the select button now scrolls on the top right of the television. I wouldn’t say that I’m good at multiplayer but I do all right. Yes, I occasionally have bad rounds where I die a lot, but it’s still fun.

Overall, the story is mediocre but then again “Call of Duty” isn’t known for its stories, but for the action packed gameplay. The game isn’t a “must have,” so I would wait until the price goes down to buy it, if you buy it at all. However, I know that a lot of other people have this game and that could make you buy it to play with your friends.

“Call of Duty: Ghosts” is available on multiple platforms such as: the Xbox 360 and Xbox One, PS3 and PS4, the Wii U, and a PC. The price is $59.99 for most platforms. The game is rated mature and is overall a decent game.

Katie Gibbs is a senior Broadcast Journalism student from Belton, Texas. She currently serves as a producer for Texan TV News and a staff writer for Texan News Service.