The Tarleton State University campus has been closed from Wednesday afternoon to Sunday due to both inclement weather and debris caused by the icy conditions. University spokeswoman Cecilia Jacobs told Texan News that campus was closed Friday through Sunday due to potentially hazardous debris but that campus should be open by Monday. 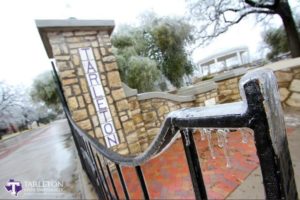 Icicles formed all over structures and trees on campus during the freezing rain and temperatures. Photo courtesy of Tarleton State Twitter

Despite the campus closure, some Tarleton facilities remain open. The dining hall, Thompson Student Center and recreation center were open throughout the week and will continue to stay open. Troy Kelly, campus supervisor at the rec, says he wasn’t surprised that the rec remained open.

“I’m not surprised, we stay open during stuff like this anyway, our hours change that’s it. We’re one of the facilities that stay open like the student center and dining hall,” Kelly said.

Even though he wasn’t surprised by the rec remaining open, he is disappointed he didn’t get the day off that many of his colleagues did.

“I was pretty sad actually,” he said jokingly. “Mostly because the roads were bad and the weather was as well.” 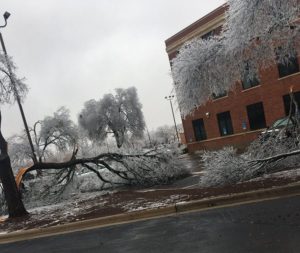 Many trees around campus and in the community were damaged after the past couple days of freezing rain. Photo courtesy of Shelby Griffin’s Twitter

Chris Gibbens, a Tarleton football player, said that despite campus being closed his offseason workouts were still mandatory. Gibbens said that even though the weather was less than ideal that “it builds character.”

“It sucks being in the cold, but it’s what you have to do to take that next step towards winning a conference championship,” said Gibbens.

Ground crews on campus will work this weekend to clear debris caused by the storm. Stephenville is also forecast to have temperatures in the low 70s for Saturday and Sunday to give residents a break from the recent cold weather. However, as things thaw out, be sure to watch for falling limbs if you find yourself on campus.